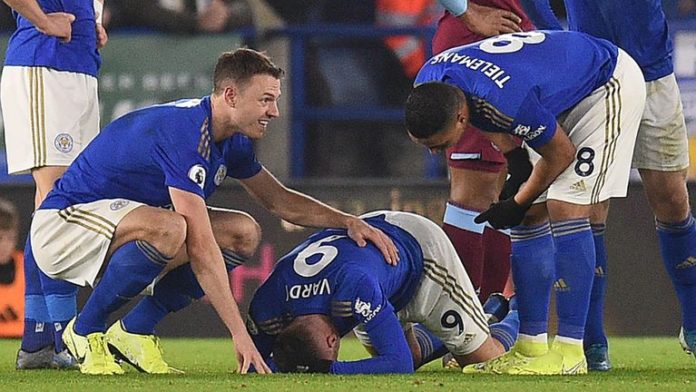 Watch Aston Villa vs Leicester on Tuesday from 7pm on Sky Sports Football; kick-off is at 7.45pm

Brendan Rodgers says Leicester striker Jamie Vardy’s injury is not as serious as first feared and is “hopeful” he will be fit for the second leg of the Carabao Cup semi-final against Aston Villa.

Vardy was withdrawn during the first half of the Premier League win against West Ham on Wednesday after he pulled up when making a clearance inside his own box.

The 33-year-old will not be involved in the FA Cup clash at Brentford on Saturday, but Rodgers is hopeful of having his talisman back when Leicester attempt to reach Wembley against Villa on Tuesday.

“He’s not available for the weekend and there will be a question mark for Tuesday, although it’s certainly not as serious as we first thought,” Rodgers said.

“It’s not his hamstring, it’s a glute, so we’re hopeful for Tuesday, but there’s a little bit of work to do. He’ll get some work in with the medical team. He’ll stay with them for the weekend.

“He’s much better than directly after the game, when he was tight and sore and struggling to move. But today he was much better.”

However, the news was not so good for Leicester regarding midfielder Nampalys Mendy, who was also forced off in the first half against the Hammers with a knee injury.

Rodgers thinks he is looking at an absence of between four and six weeks.

Rodgers also reiterated that Leicester are hoping to bring in another centre-back in January, amid reports linking his side with a move for Southampton’s Jannick Vestergaard.

The Leicester boss has been searching for centre-back cover after the club sold Harry Maguire to Manchester United in the summer for a world-record £80m fee.

He said: “We’re looking at options to support the squad between now and the end of the season in a couple of positions and centre-half is certainly an area that we’re looking at.

“We want to get Filip Benkovic out on loan to get some games and get that experience that he needs, but whilst doing that we need to ensure that for the remainder of the season we’re covered and still at good strength.

“There’ll be a number of names thrown about but we obviously won’t speak about anyone until they’re through the door.”