Home World What it’s like to own a superyacht 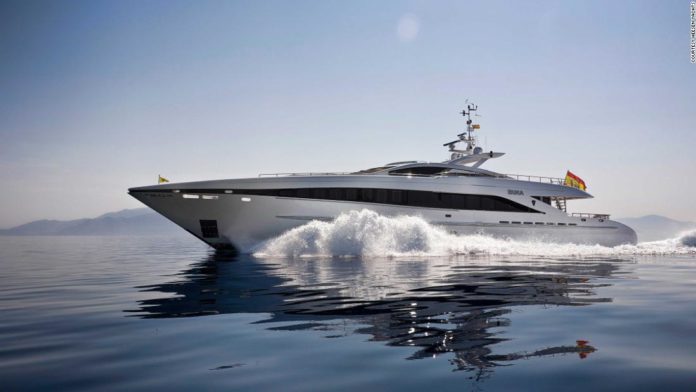 (CNN) — It’s a lifestyle most of us can only daydream about — speeding through crystalline seas on a private floating palace, sipping cocktails with views of islands and open ocean, the sun beating down on the pool deck.

This is the world of the superyacht owner. Opulent, expensive, untouchable.

And mostly secretive. For all the rest of us know, life on board these vessels could be an endless stream of wild parties peopled with Bond villains, supermodels, soccer players and movie stars.

Not quite, says Spanish businessman Joaquín Folch-Rusiñol Corachán, the proud owner of superyacht Buka, a gleaming 36.8-meter vessel that spends most of its time sailing the sunnier waters of southern Europe.

In a rare interview, Folch-Rusiñol Corachán gave CNN Travel the rundown of what it’s actually like to own one of these lavish leviathans, why he’s willing to spend his millions keeping it afloat, what he uses it for — and whether his friends are jealous.

“We feel like it’s our second house,” Folch-Rusiñol Corachán, told CNN Travel via phone from his yacht, parked somewhere in the Mediterranean.

Buka, built in 2006 by Dutch luxury ship manufacturer Heesen, has a top speed of 31 knots (about 36 mph), four generously proportioned cabins and is valued at an estimated $10 million.

At the 2019 Monaco Yacht Show, where Folch-Rusiñol Corachán will be rubbing shoulders with fellow superyacht owners later this month, Buka will be dwarfed by oceangoing titans such as the six-deck, 106-meter Amadea, which comes complete with a helipad on the prow.

For the Spaniard, owning a custom-built superyacht was all about continuing a passion passed down by his late father, who bequeathed him a wooden motor yacht — also called Buka — that he’d bought in the 1970s.

Bitten by the fancy boat bug, Folch-Rusiñol Corachán upgraded in 2000 to his first superyacht, a 32-meter vessel built by Heesen that, in keeping with family tradition, he again called Buka.

When it came to the third and current incarnation of Buka, Folch-Rusiñol Corachán drew upon his engineering background to contribute to the design process. His wife — whose name he says he’d prefer to keep private — gave input on the interior design.

“Building the boat — obviously with the yard — was one of the nicest periods of our life,” he recalls.

The couple is based in Barcelona, in Spain. Their proximity to the water was, says Folch-Rusiñol Corachán, an influence on Buka’s streamlined, open design. “We were always close to the seas,” he says.

But as a self-confessed adrenaline junkie who also races cars and motorcycles, his principal concern was how fast the vessel could go. “Speed was, for us, a main priority,” says Folch-Rusiñol Corachán. “But also, we wanted a boat [that] can cruise at low speed.”

Buka was created with a semi-displacement hull, which allows the boat to rise up in the water, decreasing drag and increasing potential speed to more than 30 knots, faster than the standard cruising pace of about 20 knots.

“But for example, today, we left the marina and we were doing 12-13 knots at very low rest,” he adds. “So it’s quite versatile.”

Home away from home

The interior of the yacht was designed by Omega.

The yacht’s interior, Folch-Rusiñol Corachán says, is “personal.” His wife collaborated with Dutch yacht design company Omega to create something to match the family’s taste.

Its four cabins, he says, typically never accommodate more than six guests. The couple has two sons and two young grandchildren, so “it’s a perfect size,” he adds.

The family lives on the yacht, in some combination, from early May to the beginning of October.

Their favorite hangout? The Balearic Islands, not too far from the yacht’s base in Barcelona.

But if you’re imagining a summer of beach clubs and cava, think again.

The family are more into sports than partying.

“We are very sports oriented, the whole family,” says Folch-Rusiñol Corachán. “So when we go the Balaerics, which is well known for the parties, we don’t live that kind of lifestyle. On the contrary, we go to bed early, wake up very early, gym, swimming, bicycling, running.”

Buka doesn’t have the crazy-cool features that some of the giant superyachts have, insists Folch-Rusiñol Corachán. No helicopter pads or submerged underwater lounges.

So, would he consider getting a bigger yacht?

“If in the future we go for a new project, it would be probably, I don’t know, four meters more, but no more than that.”

The superyacht is based in Barcelona.

While some superyachts and their owners often find themselves the focus of tabloid photographers, Folch-Rusiñol Corachán says the kind of lifestyle he and his family lead doesn’t lend itself to attention.

“If you are in Ibiza, with all the paparazzi going around and all these famous Russian millionaires and so on, you might have this approach, but we try to keep a very low profile,” he says.

During the winter months, Buka is based in the Royal Yacht Club of Barcelona, where the family occasionally take her out, weather depending.

“When we have some winter, sunny, nice days, we go out with the boat towards Tarragona or towards the south,” he says.

Folch-Rusiñol Corachán is also a judge in the annual World Superyacht Awards.

Folch-Rusiñol Corachán is also involved in judging the World Superyacht Awards, which hands out prizes to some of the swankiest vessels afloat.

“It’s a lot of work,” he says, describing something that sounds precisely the opposite.

“The Europeans, we go to the Monaco Boat Show, in September, and the [judges] in America, they go to the Fort Lauderdale boat show,” he says.

“Some of the owners or the owners’ representatives are kind enough to [give us] a small sail.”

Judging the year’s yachts is also an opportunity to network with others from the boat-owning global elite and share tips and tricks for enjoying the ocean.

“I’ve built a very, very strong friendship with a Mexican judge,” says Folch-Rusiñol Corachán, “He was with me in the Med on board and I was with him in Mexico.”

And are his non-yacht-owing buddies ever jealous of his amazing vessel and enviable lifestyle?

“There is a saying in Spanish, which I am going to translate: “‘The best of this world is to have a friend with a boat,'” he laughs. “Because you avoid all the hazard of owning a boat, because — if you truly maintain it immaculate — it gives you a lot of work.

“I’ve never thought, while inviting someone on board, that he would be jealous.”

Superyacht owners are apparently becoming more conscious of the ecological impact of their vessels.

As a Superyacht Award judge, Folch-Rusiñol Corachán is expected to stay up to date with the latest trends in ship building, such as the emergence of “eco” superyachts like the Black Pearl, a distinctive vessel powered by huge black sails and diesel-electric hybrid system.

“If we decide to build a new one, it will be, for sure, on these parameters,” he says.

One thing the superyacht owner knows for certain? He still harbors a dream of sailing to the small spot in the Pacific where his family’s yachting journey began.

Buka is named for an island in Papua New Guinea, where, Folch-Rusiñol Corachán says, back in the ’60s his mother and father got temporarily stranded when their boat was caught in a storm.

The couple were put up by locals and always remembered the experience fondly.

“Since then, my father decided to call our boats Buka. I would like to go there once in my life,” says Folch-Rusiñol Corachán.