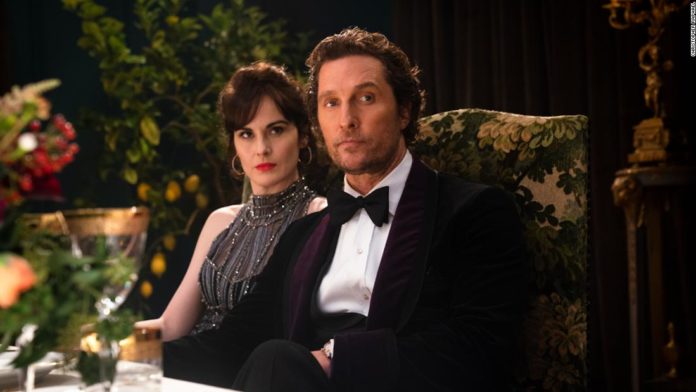 Wearing multiple hats as director, writer and producer, Ritchie loads up with an intriguing roster of stars, including Matthew McConaughey, “Downton Abbey’s” Michelle Dockery, “Succession’s” Jeremy Strong, “Crazy Rich Asians'” Henry Golding, “Sons of Anarchy’s” Charlie Hunnam, and over-the-top roles for Hugh Grant and Colin Farrell.
None of it particularly adds up, but Grant plays a shady tabloid journalist attempting to blackmail the wrong people, leading Hunnam’s character through a deep dive into the business dealings of McConaughey’s slick weed salesman Mickey Pearson, who is trying to divest his industrial-scale enterprise in a sweet nine-figure transaction.
There are, naturally, a host of complications, with multiple interested parties all looking for their slice of the pie, frequent bursts of violence and plenty of colorful (and occasionally racially offensive) nicknames.
Mickey operates by his own sort of gentleman’s code, giving McConaughey a chance to play him with a suave bravado that, alas, seems a little too reminiscent of his car-commercial persona. Fortunately, Grant and Farrell are consistently amusing in a highly eccentric way, and Dockery gets to show off her bad-gal side, about as far from Lady Mary as one can get.
While “The Gentlemen” is infrequently laugh-out-loud funny, there’s a wry spirit running through it, and a very knowing sense of movie conventions (including a movie within the movie riff) woven into the narrative.
Ritchie’s approach clearly isn’t for everybody, and at times his work appears so enamored with itself — elevating style over substance — there’s the risk of getting high on one’s own supply. Here, the hectic nature of the action works against getting caught up in what’s happening, which includes a few out-of-left-field threats.
In this case, though, the film’s pleasures and quirks generally overcome its excesses, the disclaimer being that it’s more rewarding to savor individual moments than fretting about or trying to make sense of every twist and turn.
The dialogue is too proudly vulgar to call the movie classy, but there is a playful aspect to seeing these actors chew their way through this ruthless world. In that sense, seeing them all dressed up is basically reward enough, even if “The Gentlemen” doesn’t really give them anywhere much to go.
“The Gentlemen” premieres Jan. 24 in the US. It’s rated R.