Home Lifestyle Inside America’s First Weed Restaurant, Where You’ll Be Paranoid for No Reason 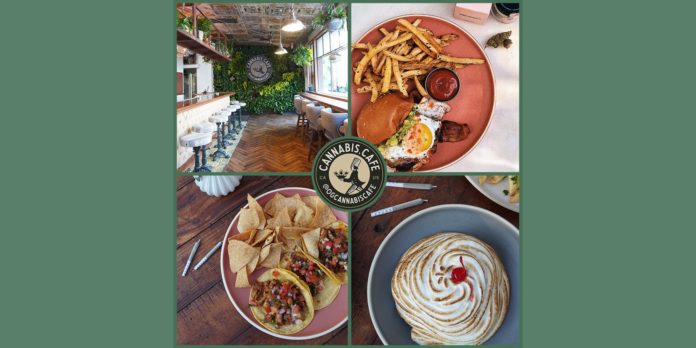 The thing you need to know about the food at Los Angeles’ Original Cannabis Cafe, America’s first legal weed restaurant, is that it is not actually made with marijuana. Sure, pre-made, individually wrapped weed edibles are available for purchase, but your entrée will not be cooked with THC butter nor will your dessert kick in on the drive home. The second thing you need to know about the food at the Cannabis Cafe is that it comes immediately. Like, you order a burger, and it is in front of you before the second “r” has left your mouth. As one waiter tells it, “We find that when people here decide they want food, it’s kind of more like they need food.” You do not so much order your meal at the Cannabis Cafe as conjure it. And you are psyched.

Also, the food is good as hell.

It’s odd that only now, after years of marijuana legalization spreading across the country, with 11 states now allowing recreational weed for people over 21, has such a place come to exist. Colorado has a few marijuana lounges attached to dispensaries, but this is the first full-service restaurant that allows customers to openly smoke and eat. Chalk it up to the progressive politics of West Hollywood, where the Cannabis Cafe is located. Long at the forefront of legalization—WeHo had the country’s first medical marijuana dispensary at the height of the AIDS crisis—it is the first city in America to develop cannabis consumption licenses. A few more Los Angeles restaurants are in the process of getting their licenses together, and what starts in California always makes its slow and steady way across the country. But for now, the Cannabis Cafe is the only one of its kind, quietly making history.

A burger and some bongs.

The process of entering the Cannabis Cafe is a couple steps more rigorous than it would be at any of the many bars in the neighborhood. Your ID gets swiped, you’re entered into the system, and while you wait for a seat, you stand in line with a whole bunch of other people who also have no idea what they’re in for. On my first visit, I run into an acquaintance out front, and we have a brief, nervous conversation, the kind you might have before you go skydiving.

Once you’re inside, it is impossible to detect the scent of skunk. The place is outfitted with a casino-grade air filtration system that whisks the smoke up, through a charcoal filter, and out into the West Hollywood skies. It works so well, in fact, that the Cannabis Cafe is the only place in Los Angeles that doesn’t smell like weed. It’s a comfy space, walls lined with living plants, a bit like the common area on Love Island. It’s welcoming. Mellow. Of course.

You get two different menus, one for food and one for weed. We dive into the latter first at our table: my boyfriend and me, plus another couple we’d been long overdue for a dinner with. We peruse the pot menu exactly the way—and with exactly the same level of fluency, which is to say very little—we would a wine list. Offerings are listed by THC content and accompanied by tasting notes, like “calm, mindful, woody” and “heavy, euphoric, creamy.” Whereas at the restaurant next door we might ask for a bottle recommendation to complement a steak, at the Cannabis Cafe, our request is along the lines of “moderate giggles, low anxiety.” The waiter makes a suggestion, we nod as though we have any idea what she’s talking about, and in a couple of minutes she returns with one pristine joint. Nobody at the table can stop themselves from looking around to see if we’re going to get busted.

Inside the very mellow Cannabis Cafe.

You can order joints by the single pre-roll (starting at $15 and going up to around $60) or packet, or just buy packaged flower by the eighth ($70 to $85-ish), which you can smoke out of the restaurant’s pipes and bongs for a low rental price. Or you can bring your own weed if you pay what I swear to God they call a “tokage fee.” Listen, we’re all new at this. At $20 for a plate of keto nachos, the food is a buck or two more than it would be down the street, but over there you’d have to get high in the parking lot.

Another mind-blowing, paradigm-busting thing you notice right away at the Cannabis Cafe is that you’re in a crowded Los Angeles restaurant and absolutely nobody is raising their voice. No bro whoops, no performative shriek-laughs. Everyone is on their best behavior, trying mightily not to be the one who fucks up a promising thing. Or they’re just incredibly self-conscious. In direct contrast to every bar you’ve ever been to, at the Cannabis Cafe, all of the fights will be internal.

Nobody at the table can stop themselves from looking around to see if we’re going to get busted.

That’s certainly the case for me. After we pass our joint around a couple of times, I begin to feel the effects and immediately remember an important detail: Oh, wait a minute, I hate being stoned in public. I become conscious of my body, of my tongue in my mouth, of the fact that I’m only going to get higher from here, and I flag down our waiter to ask a very important question, just in case: “Does the Cannabis Cafe employ, like, a panic attack steward?”

And guess what. They do. All of the Cafe’s waiters are equipped to handle your bummers. As a bartender must train to learn the ABV of her beers and spot the signs of intoxication, the staff here learns the potency of all the Cafe’s products and how to deal with someone who’s spiraling. (The secret, I am told, is a cold towel and a glass of orange juice.) Not that they’ve had to act all that often; according to our waiter, the few times a professional was called to intervene was to ease some mild cases of overheating on a hot afternoon on the sunny patio. Ultimately, I don’t need to be talked down, but just knowing that I have the option calms me considerably.

But I am still high in a public place, and I still don’t quite know what to do with myself. I text my acquaintance from out front, “I want to come by and say hi, but I don’t know where you’re sitting, and also I’m scared to walk.” I want to move my limbs around a little bit, but here is my self-talk on that topic: If I get up and start walking, everyone here will know I’m high, and they’ll be mad at me. This is a real thought I have, with my mind, in America’s first recreational cannabis restaurant. That’s the point at which I realize everyone in this space has at least briefly had the same thought, the point at which I start laughing and find it hard to stop, the point at which I become a cliché and decide not to mind. A person can go on a real personal journey at the Cannabis Cafe.

Bud to go with your brunch.

While I am an amateur smoker at best, one thing I realize is that weed is generally an adjunct to another event: a movie, a concert, sex. Rarely do you and your friends smoke a bowl and then sit around a table looking at each other. I know this because I am with my partner and two of my best friends, people who are percolating with stories when we get together, and in this moment we have almost completely stopped talking except to say things like “wow.”

But this does give us time to focus on the menu, which is full of healthy vegan options that you will absolutely pass over for nachos or a burger, which I do, and which I am eating within 45 seconds. My tasting notes for this burger are as follows, in full: fuck yes.

The Cannabis Cafe does not have a liquor license, but beer and wine will be available sometime this year, and, truly, not a moment too soon. “I am dying for a glass of wine to make me feel normal,” my acquaintance texts back, after 30 seconds or two hours. While the veteran stoner will feel right at home in a booze-free environment, the rest of us might need a beer for balance.

The Cannabis Cafe is a great leap forward, although some of us can’t quite jump that far yet. It is a welcome addition to the neighborhood, an important step in America’s changing relationship with marijuana. It’s good to know it’s here. I’ll probably be back. If I’m too stoned to say hi, just be cool about it.

Why The Recent Signal That Appeared to Come From Proxima Centauri...

Terpenes: The Little-Known Compounds That Make Cannabis a Better Medicine