Home Lifestyle In the beginning: The making of the Mac 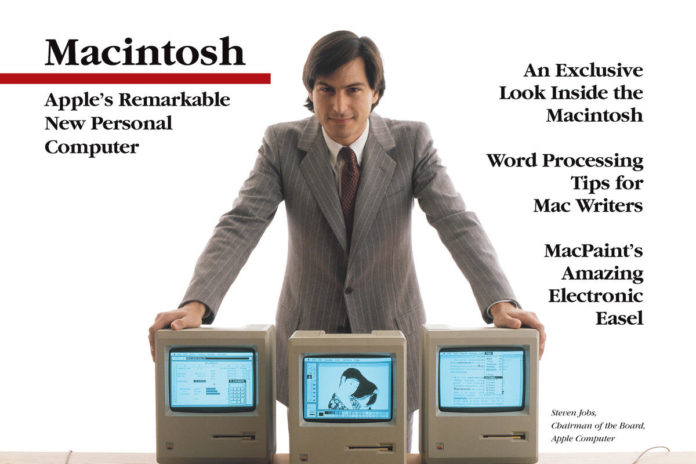 Editor’s note: January 24, 2020 marks the 36th anniversary of the unveiling of the Macintosh. This article originally posted on the 25th anniversary.

However, almost as soon as the Apple II was launched, the company began planning successors for its flagship product, fearing that the Apple II would have a limited lifespan. (These fears wound up being unfounded, as variations on the original Apple II model sold well for more than 15 years.) The most enduring result of this quest was the Macintosh computer.

The course of events that led to the Mac as we know it was convoluted, the result of luck or coincidence as much as planning. But those events began with desire of Apple executives to develop a next-generation computer following the success of the Apple II.

The first stop on the journey to a post-Apple II world was the Apple III. Conceived as a business machine, the Apple III was compatible with Apple II hardware and software but also ran software designed specifically for the Apple III.

The Apple III turned out to be one of Apple’s biggest flops. Plagued with design flaws (including an overheating issue, due to Steve Jobs’ insistence that the system ship without an internal fan) and offering hardware that didn’t go significantly beyond what could be added to the less-expensive Apple II, the Apple III was eventually pulled from production after costing Apple $60 million (most of it in support efforts for customers).

Another next-generation computer conceived as a business machine was the Apple Lisa. The Lisa’s original specifications were for a basic business computer with a price tag of $2,000. It was not intended to offer any next-generation features. But when it was released in 1983, the Lisa became the first Apple product to feature a graphical user interface (GUI), similar to the one that would ship on the Mac a year later.

Early in the development of the Lisa, Jobs and a handful of Apple engineers made two trips to the Xerox Palo Alto Research Center (PARC). Xerox had created PARC as a think tank for engineers to develop new technologies—a place where some of the brightest technical minds could work to develop innovative products.

Technologies such as ethernet, object-oriented programming, and GUI operating systems that accepted input from a mouse all emerged from PARC. Focused more on its copier business than on the emerging computer revolution, Xerox let many of these technologies languish because executives couldn’t understand how to turn them into marketable products.

In 1979, Jobs and a team of Apple employees arranged two visits to PARC, allowing Xerox in return to invest in Apple before the company’s initial public offering. After seeing the earliest examples of many modern computing technologies—most notably the mouse-driven graphical operating system of the Xerox Alto—Apple decided to add as many of these technologies as feasible to the Lisa spec sheet. Engineers at Apple set about reverse-engineering and expanding on many of the features they had seen at PARC.

The result was a computer that looked little like the original plans. When the Lisa shipped, it included a built-in display, a keyboard and a one-button mouse. The Lisa operating system featured not just a GUI that responded to mouse input, but several innovations that would go on to become standard features in Mac OS, Windows and other modern operating systems: files represented by icons, pull-down menus, and drag-and-drop functionality. It also pioneered Apple’s QuickDraw screen-drawing technology.

Lisa also shipped with a suite of productivity applications that included spreadsheet, drawing, word processing, graphing, project management and terminal-emulation programs—and a file manager. This was an important inclusion, as the Lisa was incompatible with any other software on the market (including the Mac when it was released).

Despite pioneering many technologies, the Lisa never developed a significant following, largely because of its $9,995 price tag. Other factors in its failure were its incompatibility with other systems, its somewhat finicky floppy drives and rumors that Apple was working on a less-expensive “baby Lisa.”

Apple did drop the price to $6,995 later in 1983, and the Lisa 2 was priced at $3,495 when it shipped in 1984. Still, Lisa sales failed to take off. Eventually, Apple converted its stock of Lisas so they would work with the Mac OS and sold the remaining units as the Mac XL. A conversion kit was also sold to existing Lisa owners. When the Lisa was finally discontinued in 1989, Apple literally buried the product, interring all unsold Lisas in a landfill in Logan, Utah.

Despite the fact that the Mac would go on to be a revolutionary product, it had humble beginnings. Commissioned in 1979, the Mac was conceived as a low-cost personal computer intended for the average consumer, with a price tag of around $500. The Mac project was initially considered a research product, one that didn’t have the high profile of either the Apple III or the Lisa. Jef Raskin, at the time Apple’s director of publications and new product review, was chosen to oversee it.

The somewhat obscure nature of the Mac project was one of the factors that led to its radical re-imagining by Steve Jobs. After the failure of the Apple III, the Apple board had reservations about allowing Jobs to manage another high-profile project. When Jobs asked to take over the Mac project, the board allowed him to do so, feeling that the relatively unknown project wasn’t critical to Apple’s well-being.

Under Jobs, the Mac went from being a low-cost computer with a traditional text-based interface to being a less-expensive version of the Lisa. But duplicating the work happening on the Lisa wasn’t the only goal Jobs had in mind. He envisioned the Mac as expanding on the Lisa’s advances.

The result was a resolution by Jobs and his Mac team not only to make a “baby Lisa” but also to turn the Mac into a product that could advance the computing industry as much as or more than the Apple II had done—or, as Jobs has been quoted as saying, to “put a dent in the universe.”

The Lisa and Mac teams actually worked simultaneously on similar technologies for some time, and a rivalry between the two groups developed. The Mac team fancied themselves as pirates—going so far as a to fly a pirate flag outside their workspace—as opposed to the more corporate-oriented Lisa team. During the race to get both products to market, Jobs made a $5,000 bet with Lisa project manager John Couch that the Mac team would win. In the end, the Lisa made it to market first, but the Mac developed a much larger following—and a much longer lifespan.

The drive to develop the Mac took on an almost religious fervor, with Jobs giving T-shirts to his engineers that read “90 HRS/WK AND LOVING IT.” Throughout the process, ideas and even employees were regularly poached from other teams within Apple.

One casualty of this zeal was Raskin; after repeated conflicts and a final showdown with Jobs, he chose to leave Apple and the Mac behind. Raskin eventually did end up developing some of his original ideas for the Mac into a word processor, which was sold in the late 1980s as the Canon Cat.

Despite the passion and long hours that went into its development, the Mac slipped past its ship dates more than once—largely because the difficulty of developing the system was underestimated. After the team missed one date in 1982, Mike Markkula, chairman of Apple’s board at the time, gave Jobs a woman’s black undergarment, saying that it was “the Mac’s last slip.”

What the Mac became

While many things changed during the Mac’s development, some of the original design concepts remained. Conceived by Raskin for the “person in the street,” the Mac was from the beginning aimed at being simple to use without complications such as expansion slots or cables. This consideration meant that users wouldn’t need to worry about opening the computer for any reason.

The idea inspired the Mac’s all-in-one look (and lack of expandability). Even the “person in the street” idea ended up informing the Mac’s eventual tagline as “the computer for the rest of us.” Indeed, although Jobs took over the Mac project and Raskin left Apple before it shipped, Raskin is often credited as the father of the Mac.

Still, the computer that Apple shipped in 1984 bore only a passing resemblance to Raskin’s original Mac concept. In fact, rather than costing the consumer $500, the first Macintosh to ship cost Apple about that much to produce. The ultimate cost for new Mac owners was $2,495.

When Steve Jobs unveiled the Mac on Jan. 24, 1984, it was something the likes of which the world had never seen. The new computer featured a bright graphical display and all-in-one design, relied on a mouse for input, and even offered speech synthesis capabilities. It garnered praise from both computer and mainstream publications, though some criticized the monochrome display, lack of expandability and incompatibility with existing software.

Paltry by today’s standards, the original Mac featured a 9-inch black-and-white display, 3.5-inch floppy drive (which could store 400KB of data on each disk), 128KB of RAM and a Motorola 68000 processor running at 8 MHz. It shipped with MacWrite, a word processing tool, and MacPaint, a drawing tool. Later the same year, Apple shipped the Mac 512K, which doubled the installed RAM but kept the same design.

In fact, it wouldn’t be until early 1987 that Apple would ship Macs that offered expansion slots or deviated from the all-in-one style of the original (a design still used by today’s iMac line). Embedded on the inside of the case of every original Mac are the signatures of each member of the team that helped create it, including Raskin and Jobs.

Over the years, the Mac has grown and changed significantly. The original model has given way to hundreds of updated models over the years. The processor family on which the Mac is based has gone through two major changes. Apple has even successfully managed to change the core of the Mac operating system in the release of Mac OS X.

And yet the Mac remains true to its beginnings, an icon of how simple a computer can be and how much it can do.

This story, “In the beginning: The making of the Mac” was originally published by Computerworld