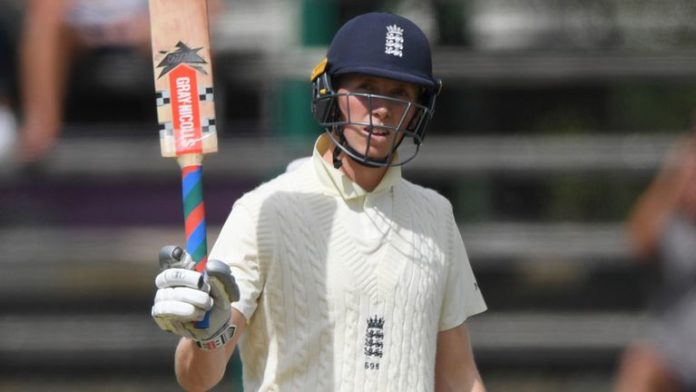 Watch day two of fourth Test from 7.30am on Saturday on Sky Sports Cricket

The first Test of the English summer does not start until early June but already it feels as if we have hit upon one of the talking points that could dominate the build-up.

There have been debates over who should be opening the batting for England in Test cricket ever since Andrew Strauss retired in 2012 and following Zak Crawley’s impressive maiden international fifty at the Wanderers, it seems as though we are going to be having that discussion again – albeit this time with a fresh new twist.

Rather than too few opening batsmen, they now find themselves in a situation where they could have one too many.

Rory Burns had established himself at the top of the order prior to his series-ending injury ahead of the second Test in South Africa, Dom Sibley promptly announced himself on the international scene with an unbeaten hundred in Cape Town and now Burns’ replacement, Crawley, has signalled his intent with a first half-century in Test cricket.

As is so often the case when assessing a batsman new to Test cricket, it was not just the runs, 66 of them in this instance, that Crawley scored in Johannesburg but also the manner in which he scored them that caught the eye.

This is just Crawley’s fourth Test but the player confidently driving Vernon Philander and pulling Anrich Nortje with conviction, even after being struck on the lid by the fast bowler, is almost unrecognisable from the one who fell cheaply in a nervy debut innings, in the middle-order, in New Zealand.

You would expect young players to become more confident the more they play at Test level but Crawley has had only three innings between his first in Hamilton and his latest, and walked to the crease with a top-score of 44 and an average of 18.50, yet throughout his knock he seemed entirely assured.

When he was dismissed by Philander, playing, by his own admission, “a poor shot”, it came as a surprise. He was set, looking comfortable and well on his way to a three-figure score.

“He’ll be happy he got fifty but that’s about it,” said Rob Key, who has worked with the Kent batsman over the past few years.

“Zak’s the type of lad who will actually be fuming with himself because he’ll have thought there was a chance of a hundred. He did all the hard work, played beautifully, never looked in any real trouble – even when the short ball hit him, he corrected that pretty quickly.

“That’s the best we’ve seen him play in an England shirt and there was a hundred up for grabs and then you see wickets go down at the other end which will have made him feel even worse.”

Similar could be said of Sibley, who fell just short of a half-century after putting on 107 for the opening wicket with Crawley. It was England’s first stand of 100-plus for the first wicket since 2016.

The pair batted well together and their styles complimented each other, Crawley the more fluent, scoring either side of the wicket, while Sibley quietly accumulates at the other end, springing into life when a bowler makes the mistake of straying onto his pads.

With only the second innings in Jo’burg and two Tests in Sri Lanka before the start of the county season, it may be just five innings before the partnership is broken up though.

Burns is targeting the first round of the County Championship for his return and provided he makes a reasonable start to the year with Surrey, it is hard to see the left-hander failing to reclaim his place. After all, he is the only one of the trio with any experience of playing Test cricket in English conditions and he fared rather well against Australia last summer.

That leaves Sibley and Crawley battling it out for the other opening berth. Unless, of course, England try to squeeze in all three. The sample size is small but Crawley appears to have the game to bat at No 3 if required and with Joe Denly continually doing enough to keep his place without really cementing it, he may find his place under threat from his Kent team-mate.

Denly, too, is likely to have another five innings to press his case – although how instructive the four innings on big-spinning surfaces in Sri Lanka will be when determining the merits of batsmen for a Test series in England is debatable in itself.

There are more than four months before the England selectors have to make a decision and with the potential for injuries and loss of form, the landscape could look completely different by then.

For now though, especially after the past eight years, England fans should make the most of trying to solve a rather more enjoyable puzzle at the top of the order.

Watch day two of the fourth Test between South Africa and England live on Sky Sports Cricket from 7.30am on Saturday.