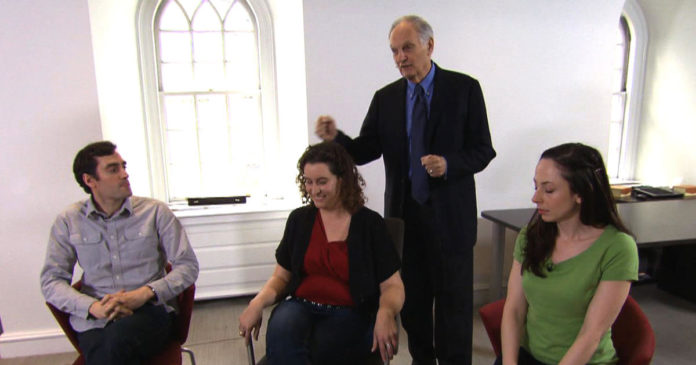 (CBS News) Alan Alda proved on the TV series “MASH” that you don’t need a medical degree to portray an Army Medic. Now, all these years later, he’s proving you don’t need a degree in science to help spread the word about the latest findings. Tracy Smith has our Sunday Profile:

And who knew that Alan Alda would be their teacher – and that it’s all his idea?

At 77, Alan Alda the actor has become Alan Alda the real-life professor, teaching scientists how to relate to people in ways they can actually understand.

“You don’t think of knowledge as a curse, but it’s a curse if I think you know everything I know and I talk to you in ways [where] you can’t understand me,” Alda said. “So that’s not only the public, that’s policy makers like Congress, who have told me over and over again they cannot understand scientists who come in to talk to them.”

“So a scientist comes in, testifies on Capitol Hill, Congress doesn’t know what he or she’s talking about?” said Smith.

“Why would you give money to somebody whose work you don’t understand?” Alda asked.

He trains scientists to be more sensitive to their audience, so instead of speaking what we might hear as scientific gibberish (“I study spatial planning and the valuation of ecosystem services to different stake holders”), we get this: “I study ways oceans are used.”

“If scientists can’t communicate with the public, with policy makers, with one another, the future is going to be held back,” Alda said. “We’re not going to have the future that we could have.”

That notion of straight-talking scientists became a mission. Alda approached New York’s Stony Brook University to let him teach their science students to talk, and the idea caught on.

Now, at Stony Brook’s Center for Communicating Science, Alda trains the best and the brightest to talk to anyone clearly.

He uses the same method that helped make him a star: improv.

“It makes you present, It makes you alive,” he explained. “You’re here and now, you’re talking to another actor. You’re not pretending to talk to the actor, you’re really talking to the actor. That changes everything about you. And it changes the other person, too, because if you’re working with a salami, you’re not going to react to that person.”

“Did you work with a few salamis?” Smith asked.

But it didn’t seem to hurt. By any measure, Alan Alda has had a magical career. He has seven Emmys, and a raft of other awards, including six Golden Globes, plus an Oscar nomination for his role as a Republican Senator in 2004’s “The Aviator.”

Of course, before that, there was a little TV role as a maverick Army surgeon who needed no help communicating.

Born Alphonse D’Abruzzo in New York City, Alda was always fascinated by science, but he had showbiz in his veins: Dad was an actor, mom a former showgirl.

“Do you think if things had gone differently when you were younger, you might have been a scientist?” asked Smith.

“I don’t think so,” he said. “I think I have other talents. I think I’m doing what I should be doing. I’m very interested in science and I want to hear from scientists, and I have experience in helping people communicate better. So I’m in a perfect spot. But to be a scientist, I think I’d be more like what Bob Newhart was when he was an accountant. He thought, ‘If you come in within a couple of bucks, shouldn’t that be okay?'”

“You have to be a little more exact than that,” said Smith.

“A little more rigorous than that, yeah.”

So after studying English at Fordham, and doing a hitch in the service — yes, Hawkeye Pierce was once an actual Army Reserve officer — Alan Alda turned to acting.

In 1971 he shot a pilot for a TV show based on the movie “MASH.” He figured it would probably last a year.

He said the medical jargon he used on “MASH” was hard to remember. “In fact, sometimes I’d write it on the patients’ bellies while I was operating on them. I was a real play doctor.”

But his passion for science was real: after “MASH,” he hosted “Scientific American Frontiers” on PBS, a series he called the best thing he ever did in front of a camera.

During the filming of one episode, the value of plain-speaking suddenly hit close to home.

“Boy, did it ever! I was on a mountaintop in Chile, interviewing astronomers for the science program,” he recalled. “And within a few minutes I was in the worst pain in my life ’cause I had a strangled intestine. And about a yard of it was dead. I could’ve died within a couple of hours.

“But there was this wonderful doctor that they brought me to who said, in the clearest possible way, ‘Something’s gone wrong with your intestine and we have to cut out the bad part and sew the two good ends together.’ I said, ‘That’s great. Do it,’ you know? So there are times when you least expect it where good communication can come in handy.”

Smith asked if his medical students are cowed by having Hawkeye Pierce teach them. “Oh God, no.”

Cowed or not, it looks like they’re beating a path to Alda’s classroom. But, he told Smith, he doesn’t consider it his life’s work.

“Oh, no. I wouldn’t say this is my life’s work, but I do spend a lot of time at it. But acting and writing give me enormous pleasure. I do it whenever it seems like there’s a chance to do something difficult but possible, you know?”

“But this is rewarding as well,” Smith said.