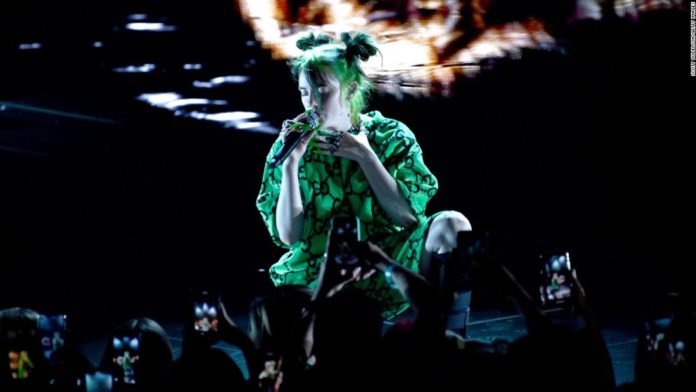 The singer spoke to CBS about how she now wants to help her fans through their own dark times, and often tells her followers on social media to practice self-love.
“I just grab them by the shoulders and I’m like, ‘Please take care of yourself and be good to yourself and be nice to yourself. Don’t take that extra step and hurt yourself further,'” the 18-year-old told “CBS This Morning” co-host Gayle King for the upcoming “The Gayle King Grammy Special.”
Eilish revealed that the last year had been a rough one for her. “I was so unhappy last year,” she said. “I was so unhappy, and I was so, like, joyless.”
Because of her newfound fame, she lost her old friends and kept getting recognized in public. She fell into a clinical depression.
“I don’t want to be dark, but I genuinely didn’t think I would make it to 17,” she said.
“Did you think that you would do something to yourself?” King asked.
“Yeah,” Eilish replied. “I think about this one time I was in Berlin and I was alone in my hotel. And I remember there was a window right there. I remember crying because I was thinking about how the way that I was going to die was, I was going to do it.”
King asked Eilish if her lyric “I wanna end me” in her song “Bury a Friend,” is actually about herself.
“It was,” Eilish said, adding, “It also rhymed.”
In the song she sings, “Today, I’m thinkin’ about the things that are deadly/The way I’m drinkin’ you down/Like I wanna drown, like I wanna end me.”
Asked why she decided to live, Eilish grew emotional as she said, “my mom.”
Her mom, Maggie Baird, also appears in the interview.