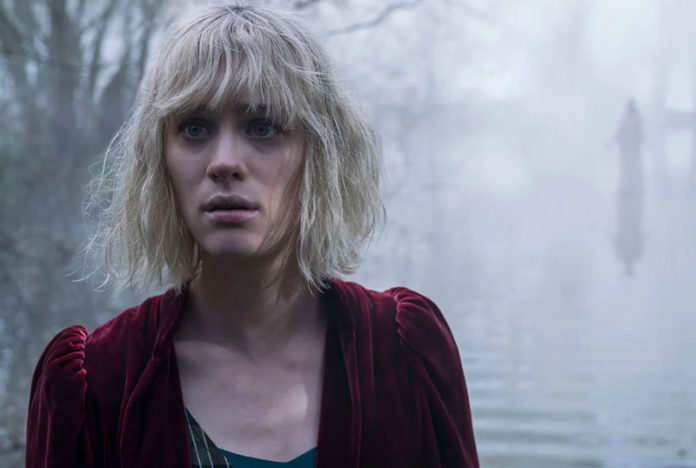 Written by Carey and Chad Hayes

Gorgeously unsettling, Sigismondi brings us evocative visuals and gothic atmosphere in this 90’s era adaptation of The Turning of the Screw. In The Turning, music, and visual mood delivers in creating a slow burn for a tutor’s descent into madness. The themes laid into the film about enabling privilege and toxic masculinity echo in the mystery as it begins to unfold. Davis as a modern tutor and Marten as a stern figure that has served and upheld everything the Fairchild family, works wonderfully as foils to one another and anchor the film’s first act. Sigismondi’s dramatic strengths are seen in scenes between the two, effectively bringing out the insidious ways patriarchy is protected by one character and challenged by another. Wolfhard and Prince provide support as children growing up raised by the ghosts of their upbringing. They shine in moments where they’re playing loving siblings and lean into the creepiness when needed. When they interact with the others in the house, it’s believable. Children just talking to someone that’s not there, is just so much NOPE. The ghostly presence of the last tutor sets up compelling scares, the ethereal movement of Thomsen and terrifying look are both grotesque and gorgeous.

The lush visual palette, music, and the interactions between Kate and the children drive the first act’s unraveling of the characters.

A lot of what seems to be set up in the first act doesn’t’ get paid off. The more adult revelations in the film that are implied such as the exact circumstances of what happened to the last tutor by the groundskeeper, who is referred to having a big influence on the eldest child, leaves the question if what was shot initially was aiming for an R rating. As the film wanders in its ornate sets and macabre aesthetic, we get whiffs of interesting plot revelations. At many points, Wolfhard seems possessed by another person entirely–which could have given the film a chilling edge, if it had been implying a supernatural take on young men learning from what they see grown men do. Prince’s storyline about her trauma in regards to their parent’s death seems as if there was more to it but only comes up when they try to leave. All the characters have strong motivations that the actors play moment to moment toward a destination we don’t get to.

The film leads to a lot of questions about what happened in post. The film does not provide a satisfying ending but the characters and moments captured seemed to lead to definite choices that left me wondering why their resolutions were left on the cutting room floor? At least seemingly. Everything suddenly shifts to a jarring ending.

Sigismondi’s guiding hand is artistically seen on-screen in the performances and bold choices presented but then feels abruptly absent in the end. The film leaves you lost in its mystifying visuals wanting more.

The Turning is now playing in theaters!