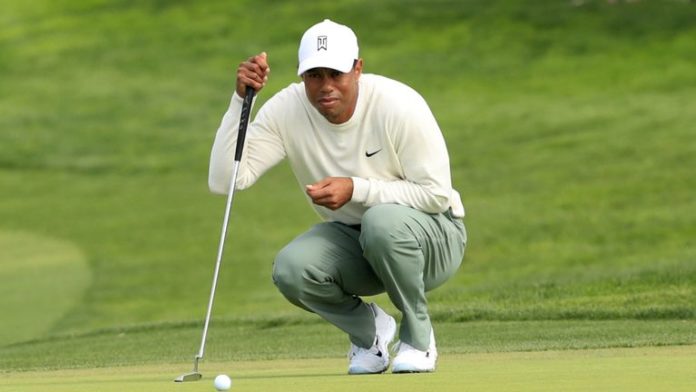 Tiger Woods had a chance to start his second round of the Farmers Insurance Open with a birdie, but nobody expected him to four-putt for a double-bogey six.

Woods was full of “positives” after his opening three-under 69 on the North Course at Torrey Pines, and he looked assured on the first hole on the South as he split the fairway from the tee and knocked a solid second to 25 feet.

The seven-time champion had a decent look at birdie, but he pulled the putt too far left and left himself with a routine two-foot tap-in for par. But he opted to go ahead and hole out without marking his ball, and his hurried jab with the putter resulted in his ball barely touching the hole and racing six feet beyond the cup.

“Whoa, what’s just happened,” exclaimed the stunned PGA Tour Live commentator as a rattled Woods trudged after his ball, marked, and lined up a tricky putt for bogey – which again missed on the left side.

The chastened Masters champion did manage to tap in at the fourth attempt, but his “aberration” on the first green saw his chances of a record-breaking 83rd PGA Tour victory take a huge hit, although he did at least have 17 holes to repair the damage!

Watch the video above to see a rare Tiger Woods lapse in concentration as he began day two with a four-putt at Torrey Pines. Live coverage continues through to Sunday’s conclusion, only on Sky Sports Golf.