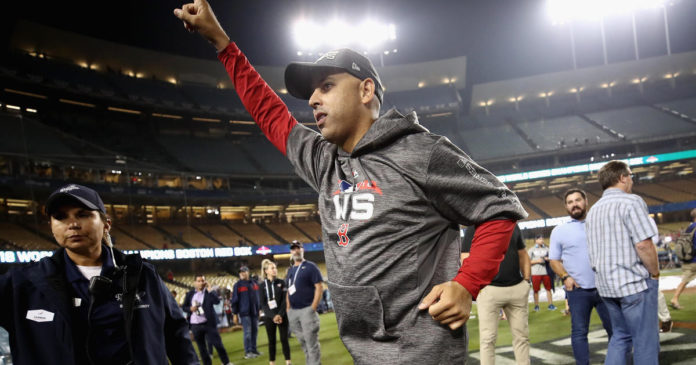 Top Major League Baseball officials allowed fantasy baseball participants to continue placing bets on the performance of players with the Houston Astros and Boston Red Sox despite knowing that the clubs were engaged in a cheating scandal that effectively tainted the players’ statistics, a lawsuit filed this week alleges.

Massachusetts resident Kristopher Olson is suing the league and the two teams for negligence and for violating state consumer protection rules. He placed at least 226 bets on fantasy sports platform DraftKings since 2017, but wouldn’t have done so had he known the Astros and Red Sox were violating league rules and that the game stats may have been affected, Olson’s attorney said in court documents.

The complaint stems from the Astros engaging in an illegal practice known as “sign stealing,” when members of one team purposely watch the hand gestures exchanged between an opposing team’s pitcher and catcher. The idea is to learn what pitch a pitcher plans to throw and relay that information to the batter, giving him an advantage.

A MLB investigation concluded this month found that the Astros and Red Sox practiced sign stealing in 2017. The activity generated skewed player stats that were then used by millions of DraftKings users, the Olson lawsuit argues.

“MLB’s fans – believing the game to be honest – have engaged in DraftKings’ games of skill to the tune of millions of dollars in daily fantasy sports baseball contest fees,” Olson’s lawyer, David Golub, wrote in court documents. “A pitcher’s ability to conceal from a hitter the type of pitch being thrown, and the intended speed, movement and location of the pitch, is critical to a pitcher’s success.”

MLB didn’t respond to requests for comment on the suit.

With DraftKings, a user selects a handful of actual MLB players to place in his or her fantasy baseball lineup with hopes that those players will outperform the fantasy lineup of another DraftKings bettor. Participants are assigned a score depending on a player’s home runs, hits, strikeouts, earned run average, runs batted in and other metrics during a game. The user with the highest score at the end of the game wins the bet.

The lawsuit states that DraftKings users, including Olson, selected pitchers for their lineup who were playing against Houston or Boston. Those pitchers performed poorly during those games even though prior data suggested the player should have done well, the lawsuit argued. The complaint doesn’t state if Olson lost money on his Houston or Boston bets.

Golub told CBS MoneyWatch he hopes to expand the case into a class action against MLB that could potentially include “millions” of additional plaintiffs. “The whole notion is that they [Astros and Red Sox] induced people to wager, and they did that and corrupted the bets,” he said, adding that DraftKings itself isn’t at fault.

Team and player data generated from professional games have become a cash machine for leagues, including MLB, since the U.S. Supreme Court in 2018 approved sports gambling in states that have legalized the practice. Six of the nation’s largest sports betting companies use official league data under multimillion-dollar contracts.

Gambling companies see value in using official data, particularly for in-game betting — the fastest-growing segment of sports wagering. Having a league’s official data serves as the last word for bettors and bookmakers.

The Olson lawsuit notes that MLB, through one of its subsidiaries, invested in DraftKings in 2013 and then signed a marketing deal with DraftKings two years later. The league provides official data for gambling purposes under a partnership with Sportradar.