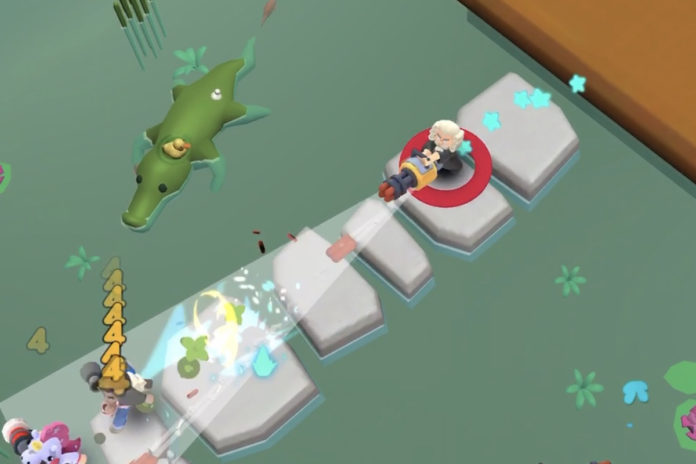 People often tell me that too much cholesterol will kill me, but I never imagined that specific death would come in the form of a wall of butter smothering the landscape. And that’s not all I have to worry about. I’ve also got 31 other people intent on slaying me with sweets. Fortunately, I raided the fridge and found a Gatling gun that spits out hot dogs.

You, too, can get a taste of such delicious adventures in Butter Royale, Apple Arcade’s latest release. As you might have guessed from the name, it’s a battle royale shooter in the vein of Fortnite, but it simplifies the gameplay down to twin-stick shooting that works fine with either a touchscreen or a gamepad like the PlayStation DualShock 4. However, I balked a bit: Another battle royale game? Aren’t these things supposed to be on the way out?

After playing it for about an hour, I’ve come to savor the way it translates the excitement of games like Fortnite or PlayerUnknown’s Battlegrounds into a bite-sized package.

Butter Royale helps itself to many servings of cues from Fortnite, so if you know Epic’s game, you already have a good idea of what to do here. You can augment your health bar with shields you find scattered about the landscape. You pick up ammo and weapons, switching them out when you find something better. You can play the multiplayer mode either solo or in four-man squads (although here you can also play against the AI). You select where you want to start each match on a map dotted with gastronomically named places like San Francheesco, Salty Shipyards, and Pasta Plaza. (Unfortunately, you don’t glide down to them. You just appear.) And then, of course, there’s the “storm” itself, which periodically cramps the play area and threatens to smother the world as menacingly as the paint in the Sherwin-Williams logo.

Familiar concepts are generally just reimagined. Good gear drops in refrigerators instead of crates, and the weapons consist of innocuous toys like icing-dispenser sniper rifles or popcorn shooters. You don’t even die in Butter Royale: You get “creamed.” Considering what’s all around you, it’s better than heart disease, I suppose. It’s an adorable aesthetic, and I wish Butter Royale had leaned into the junk food approach even more, such as by sprinkling the map with giant Twinkie boxes and skyscraper-sized Coke bottles instead of dilapidated warehouses and shipyards. It’d help it distinguish itself even more.

The really big difference, though, is that all of this stuff is entirely free—even the seasonal awards you earn with XP, such as the different flags that pop up when you die, your default melee weapon, or the footprints you leave behind as you tromp across the map. Fortnite developer Epic makes its billions of dollars from season passes for stuff like this, along with promotional skins for big movies like Star Wars IX: The Rise of Skywalker, but there’s none of that here. The only currency you have to spend in Butter Royale consists of the cookies and tickets you get from ordinary play, and even then Butter Royale places a daily limit on them, presumably to curb addition. That also makes Butter Royale a decent alternative for parents who don’t want their kids draining their bank accounts to buy a Ninja skin. As a consolation, maxing out the first season of Butter Royale nets you an unlockable skin that makes you look like a ninja. Touché.

Normally, I’d be one of the people who’d frown on a game like this, particularly since battle royale games and modes are so overdone now and the two biggest games are already free on iOS and iPadOS.

But I could see myself getting more out of this than Fortnite when I’m on my morning and evening commutes. The twin-stick design keeps gameplay simple. The top-down designed allows for a different perspective than what you get from the games that inspired it. There’s also no building component, so there’s no need to master the finger acrobatics demanded by the touchscreen version of Fortnite itself.

The maps are small, and you only have to fight against 32 people rather than 100. As you can see in the video above, I won an entire four-man squad match in less time than it takes for me to ride the subway to work. Hilariously, I won it by smacking around the last two opponents with a baguette as I’d run out of ammo, and they were incapacitated because they’d gotten caught in the butter. That’s a degree of charm even Fortnite doesn’t have.

Like so many of the junk food items scattered about its San Francheesco and Pasta Plaza, it’s a treat.