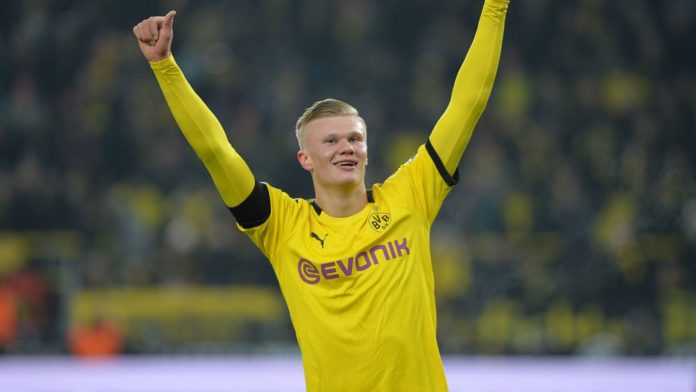 Haaland has scored five goals in 57 minutes in the Bundesliga since his arrival at Dortmund; Jadon Sancho was also on the scoresheet

Erling Haaland came off the bench to score twice as Borussia Dortmund thrashed Cologne 5-1 to move up to third place in the Bundesliga.

Haaland had started as a substitute despite scoring a hat-trick on his debut at Augsburg last Saturday, but the Norwegian, who had been linked with a move to Manchester United, continued the remarkable start to his Borussia Dortmund career, making a dramatic late impression with a brace in the final 13 minutes to seal an emphatic win.

Raphael Guerreiro had put Dortmund ahead inside the opening minute after a neat cut-back by Jadon Sancho, and Marco Reus doubled the lead on the half-hour mark.

Sancho got on the scoresheet three minutes into the second half and after Mark Uth pulled one back for the visitors, Haaland emerged to continue his stunning run of form.

Dortmund’s victory moved them back up to third place in the Bundesliga table, level on points with Bayern Munich and four behind leaders RB Leipzig.

Rebic on target again for Milan

Rebic, who scored twice in a win over Udinese last weekend, pounced on a loose ball following Zlatan Ibrahimovic’s cross to score the only goal of the game in the 71st minute as AC Milan secured a fourth straight win in all competitions.

Victory sees AC Milan climb into the Europa League places in Serie A. They move up to sixth place, four points behind fifth-place Atalanta. Meanwhile, Brescia, who were without the suspended Mario Balotelli, remain one point above bottom side Genoa.

A tough night for Pardew

Kristoffer Peterson’s 14th-minute strike gave Utrecht a first-half lead and they extended their advantage in the second half as Sean Kleiber scored twice either side of a Gyrano Kerk side.

Defeat sees Pardew’s side stay in the Eredivisie relegation places.

Third-placed Rennes failed to make significant ground on Marseille in Ligue 1 as they were held to a 1-1 draw in Nice.

Kasper Dolberg put the home side in front two minutes after the interval but after Mbaye Niang hit the woodwork, Flavien Tait grabbed a point for the visitors nine minutes from time.

Ruben Garcia’s 81st-minute penalty and a later strike from Inigo Perez gave Osasuna a 2-0 win over Levante in their mid-table battle in La Liga.