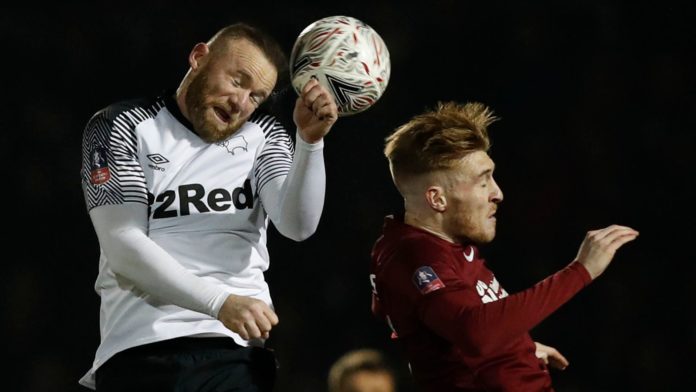 The former England skipper was a surprise inclusion for the Rams but failed to captain his new club to a place in round five as Keith Curle’s Northampton created the better chances of a 0-0 draw.

Charlie Goode should have been sent off early on at a sold-out PTS Academy Stadium but, after a poor decision from the referee, he was handed a reprieve and made the most of it by dominating the defence.

Rooney, captaining a much-changed Derby side as one of only three players to retain their place from the Sky Bet Championship win over Hull, was always going to be the star attraction against the lowest-ranked team left in this year’s competition.

Only Ian Rush and Frank Lampard have been more prolific in the post-war FA Cup era than Rooney, who has 22 goals, but these days he is deployed in a deep-seated midfield role. The 34-year-old left Manchester United in 2017 as the club’s all-time leading goalscorer and it was the Red Devils who stood in the way the last time Northampton got as far as the fifth round.

Derby remain unbeaten against Northampton in any competition, winning six and drawing five of their 11 clashes.

That was 50 years ago and on that day it was another maverick, George Best, who would steal the show as he scored six times as United sealed a 8-2 win. But, looking to match their 1970 counterparts, it was the hosts who almost took the lead with less than five minutes on the clock, a deep corner leading to a goalmouth scramble which ultimately saw Vadaine Oliver’s strike bouncing behind off the crossbar.

Referee Darren England had the Derby bench up in arms as Jack Marriott was hauled back by Charlie Goode as the last man, with the official not even awarding a free-kick for the misdemeanour.

In terms of actual chances, it was still Northampton creating the vast majority, Andy Williams with a fine turn and shot which flashed just wide of Kelle Roos’ goal after 25 minutes.

Most of Derby’s early opportunities were blocked before getting anywhere near David Cornell in the hosts’ goal, with Chris Martin the next man to be denied by brave Northampton defending.

The rest of the half passed with little incident, with Derby then making a stronger start after the interval as Rooney’s corner was headed inches over the top by Curtis Davies.

The former Hull defender, who scored for the Tigers in their 3-2 FA Cup final defeat against Arsenal in 2014, came close with another header soon after before Jason Knight forced a decent stop out of Cornell.

Northampton are unbeaten in seven games in all competitions (W4 D3), after losing three of the five before that (W1 D1).

Rooney, fresh from a lung-bursting defensive run, almost scored directly from a late corner but there was no late goal to settle the tie and the pair will both enter Monday’s draw for the last 16.