Home Sport Anderson wants no regrets with Tokyo in sight 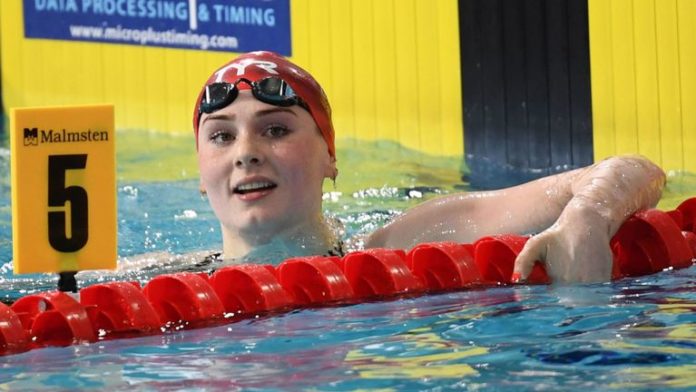 British freestyle swimmer Freya Anderson has her “eyes on the prize” with Tokyo 2020 just six months away.

The 18-year-old Sky Sports Scholar won two golds in the 100m and 200m freestyle at the European Short Course Championships in December.

The summer Olympics are now within touching distance for Anderson, and the Birkenhead-born swimmer wants to have no training regrets should she make the starting blocks in Tokyo.

“Sometimes [training] is really hard and I can’t go without moaning, but you just have to keep your eyes on the prize,” Anderson told Sky Sports News.

“With the Olympics being so close, I don’t want to be stood behind the blocks in Tokyo, if I make the team, and have regrets I didn’t put everything into the training. I’m trying to go about just not holding anything back.”

Anderson recorded a personal best when winning the 50m and 200m, as well as the 100m, at the Flanders Cup in Belgium earlier this month.

The 200m time of 1:56.06 was the third faster ever by a British woman, and her coach believes anything is possible if Anderson reaches Tokyo.

“She’s a competitor. She can stand up in the race arena and touch the wall quicker than anyone else,” said Ellesmere College director of swimming Alan Bircher.

“I think she can be on the podium. We’re trying to point her in the right direction. If that happens, so be it, if it doesn’t, back to the drawing board and she goes again.”