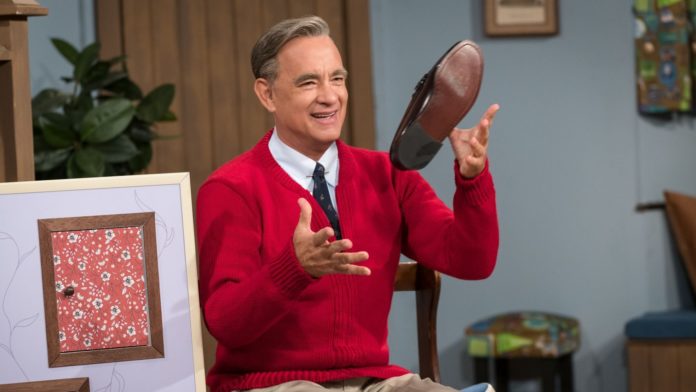 Initially reticent about taking on the role of children’s television host and American institution Fred Rogers, it was director Marielle Heller who persuaded Hollywood’s Mr Nice Guy Tom Hanks to take it on.

While Mister Rogers may not be well known in the UK, in the US he was a national treasure; the epitome of goodness in a tie and cardigan. He sang to children and used puppets to teach them about the importance of kindness, and break down difficult subjects such as death and divorce, for more than 30 years.

It is difficult to overestimate how much of an inspirational figure he was to viewers in America.

Google Tom Hanks and after “movies” (Forrest Gump, Saving Private Ryan, Philadelphia… the list goes on) and “wife” (Rita Wilson) and “Oscars” (two, so far) it’s not too long before autofill comes up with the follow-up, “nice guy”.

The internet is full of stories about Tom Hanks being nice: paying for other diners’ meals in restaurants, supporting firefighters, halting filming to escort a bride and her father to the altar, to name just a handful.

On screen, he is a hero; from Gump to Captain Phillips to Sully, it is very hard to think of a Tom Hanks baddie.

So the 63-year-old was clearly the perfect choice to play Mister Rogers in Heller’s film, A Beautiful Day In The Neighborhood.

“He absolutely was the perfect fit, largely because of how we feel about him as a person,” says Heller. “There’s not a lot of people we feel that we know in that way. And I think the reason we feel that way is because as an actor, he really lets himself be seen in a very intimate way. He makes us feel like we know him personally.”

In reality, says Heller, Hanks is very different to the slow and measured, to the point of being almost hypnotic, Mister Rogers.

“The truth is, he’s very different energetically. Mister Rogers was, I think, an introvert and pretty shy. And if you’ve gotten to hang out with Tom Hanks ever, he is not shy! He is funny and loud and boisterous and just fills a room, and he introduces himself to everybody.

“There’s never an awkward moment in a conversation with him. He’s joyful. So in many ways… I almost had to slow his whole being down, almost slow his breathing down. It was like he had to change his energy to really channel Mister Rogers.”

A Beautiful Day In The Neighborhood is not a traditional Hollywood biopic. In fact, Mister Rogers, as wonderful as Hanks is playing him, is not the focus of the film, which is based on the 1998 Esquire article Can You Say… Hero?, by journalist Tom Junod.

On screen, the character is called Lloyd Vogel (played by Matthew Rhys); a cynical journalist sent to meet the TV presenter for what he considers a short, fluffy interview, who ends up writing several thousand words on how the encounter changed his life.

The film, like that encounter, will perhaps be surprising; I certainly went in thinking one thing and came out feeling something quite different, with a lump in the throat.

“It is a very emotional movie and I hope it’s a good surprise,” says Heller. “I do think no matter what you hear, that a movie is being made about Mister Rogers, even though you hear it’s not a biopic, you think it’s got to be, it’s going to be his life story or something. But it’s not. It’s a character piece, really, between these two men.

“Lloyd Vogel, played by Matthew Rhys, a wonderful Welsh actor; it’s really his story. It’s his story about his life being changed by this relationship with Mister Rogers, and it’s these two men kind of going head-to-head emotionally. It’s a different story than I think people are anticipating.”

Heller says reading the script “made me cry so hard, I just couldn’t imagine not making this movie”.

Married to comedian Jorma Taccone, and with a son who was a baby at the time, she says the story resonated.

“I guess I was thinking a lot about how to raise a kind person,” she says. “It doesn’t feel like we have a lot of role models right now, people who are helping us find our path for how to raise good, kind human beings who are really being self-reflective and thinking about who they want to be in the world. Mister Rogers just felt like a light in the darkness.”

Like Hanks, however, Mister Rogers was more than just “nice”, Heller says.

“Obviously in the US, you know, we’re dealing with so many tough things, like school shootings and violence and things, that you just think, how do we navigate this? But somebody like Mister Rogers, who offers children but also adults tools to try to be able to cope with their tough emotions… I mean, we think, this is what we need. We’re missing this in kind of current, modern-day Twitter world.”

Was it the “niceness” which originally made Hanks hesitant about taking on the role? When you’re known for being nice, is it a lot to live up to?

“I don’t think that was his concern,” says Heller. “I think Tom, like many actors, really bases projects on people he wants to work with, and filmmakers. And he is not one of those movie star actors who kind of comes and goes, ‘I do my thing, just get out of my way and I’ll do it’.

“He loves the relationship between a director and an actor. He trusts filmmakers. And he had been a fan of my first movie, The Diary of A Teenage Girl, and we had been wanting to work together since then. So when I sent him the script, it was with the idea that we would get to work together finally, and that… I think he trusted that I had a vision for the script and that was why he signed on.

“I think it just… he needed to know whose vision it was gonna be, if that makes sense.”

Hanks was nominated for best supporting actor at the Golden Globes, the Screen Actors Guild and the Critics’ Choice awards, and is up for the same award at the Oscars and the BAFTAs.

Heller, however, has not been nominated for best director. Along with Greta Gerwig (Little Women), Lulu Wang (The Farewell), Lorene Scafaria (Hustlers) and several other women, she is once again the subject of debate surrounding diversity behind the cameras in Hollywood. (Last year’s Can You Ever Forgive Me? won Oscar nods for its stars Melissa McCarthy and Richard E Grant, as well as for best adapted screenplay, but Heller was not in the running for best director).

Heller says she tries not to think about awards when she is working on a film.

“I think if you think about that while you’re making projects, you’re probably in big trouble,” she says. “But I love that Tom is getting the kind of excitement around his performance that he is. And I think it’s so well-deserved.”

Heller says she tries to focus on being grateful for all the good things in her life.

“I really don’t like harping on the feeling of disappointment or that we’re somehow wanting,” she says politely. “I’m trying to focus more on all of the things I feel so, so much gratitude toward, which I really do.

“I feel like I’m in such a privileged position, getting to be making the types of movies I’m making and having the opportunities I have. I think if I said I was disappointed about something as petty as that, I would feel like I was not doing a good job of being grateful for what I have in my life.”

With so much talk about improving diversity, she says she believes progress is being made, but it’s slow.

“Heidi Schreck, who’s a wonderful actor and playwright, has a play called What The Constitution Means To Me, and in the play she talks about how progress doesn’t move one direction and that it’s almost like a woman walking a dog on a beach; you watch the dog run forward and backward and forward and backward, and if you just looked at that, you would think progress wasn’t being made because the dog just looks like it’s running back and forth, back and forth.

“But if you watch the woman, she’s slowly making her way down the beach. And I think that’s what’s happening with Hollywood. There’s progress happening, it’s just backwards and forwards a little bit.”

Heller herself aims to do as much as possible to support the women, and men, working on her films.

“It’s been really important for me, now that I’m in a position where I have more power and I get to make decisions, that I am making decisions that feel like they are more honest about what I need as a female director, as a mom,” she says.

“For this movie, we made sure we were doing shorter and more sustainable hours, which was something that I was not in a position before that I felt like I could request. But in this case, it was like, I know this won’t only benefit me, it will benefit all the parents on this.

“I think it’s a safer environment for people. We tend to think in making movies that you have to work 20 hour days and kind of kill yourself in order to make good art. And I think there’s a case to be made that you can be efficient and safe and head home at a normal hour, and that’s maybe better for your art.

“I said to everybody, I don’t think we could make a movie about Mister Rogers where we all abandon our children to make it.”