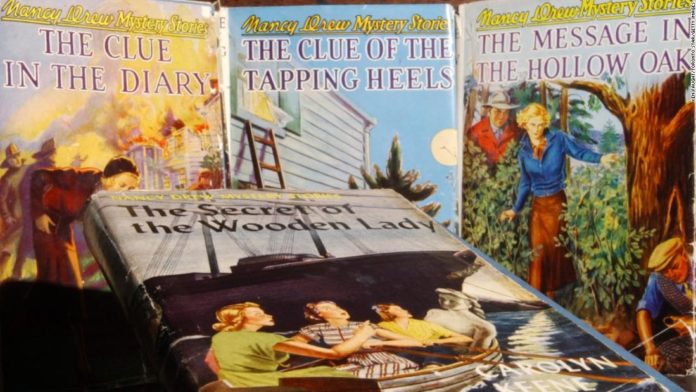 Well, she was, until a new comic series seemingly killed her off.
She’s the presumably dead star of the upcoming Dynamite comic, “Nancy Drew & the Hardy Boys: The Death of Nancy Drew.” The monthly series will see the Hardy Boys investigate the literary heroine’s death.
Longtime readers of Drew were flummoxed by the news: Why celebrate the 90th anniversary of a beloved female character by making her a ghost in her own story?
Some fans criticized the decision to apparently “fridge” Nancy Drew in her own series. “Fridging” is a comic book trope in which a female character is killed to build a male character’s development and motivation.
“The Nancy Drew books were powerful because a smart, brave, independent young woman solved crimes by doing all the things we got told weren’t for girls,” feminist writer Claire Heuchan tweeted. “Killing her off so two male characters can have an adventure is the ultimate betrayal of that legacy.”
Nancy Drew debuted in 1930, when boys’ detective novels like “The Hardy Boys” were king. In her first mystery, “The Secret of the Old Clock,” Nancy searched for a missing will. Intrigue ensued, and the character was a hit. The original series has sold more than 70 million copies.
In more than 600 books, comics, films and TV series, Nancy always has been portrayed as sharp, perceptive and impeccably dressed. Though some later iterations put Nancy in more adult situations, she remained a teenager, and she almost always solved the case, no matter the era.
But she’s never, ever died.

Creators want fans to give it a chance

Like any mystery, it’s unlikely the investigation into Nancy’s death will be straightforward. It’s also possible she never died at all. Some Twitter users posited that in the new series, she takes a page from Amy Dunne of “Gone Girl” and reappears later.
The authors still want readers to give it a chance when it’s released in April.
Illustrator Joe Eisma told Gizmodo that he promised the series wouldn’t “fridge” Nancy.
“I personally am not a fan of fridging as a plot device, and I wouldn’t have agreed to draw a book that had that as a plot element,” he said. “I just hope folks will give us a chance to tell our story.”
Anthony Del Col, author of the comic, told CNN he’s been a Nancy Drew fan since he was young. His take on the character leans “very heavily into a noir story,” he said.
He hears fans’ concerns, but he suggests they read the first issue or the previous “Nancy Drew” series he penned to understand he’s “just as big a fan of Nancy Drew as anyone else out there.”
“I think that they’ll discover in doing so how much I adore the character of Nancy Drew and how this character allows us to get to the core of who she actually is,” he said.
Jennifer Fisher, an author who runs the Nancy Drew Sleuths fan organization and has consulted on books in the series, said she’s excited to see where the new comic takes the character. There are few situations Nancy hasn’t already been through, she noted.
“Whether or not she’s really dead is the real question,” she told CNN. “My take is that I see it as being more of a ruse, and hopefully Nancy Drew is really alive and controlling the show from the shadow and investigating in secret” while the Hardy Boys think they’re on the case.
“That’s what most fans are likely hoping for,” she said.