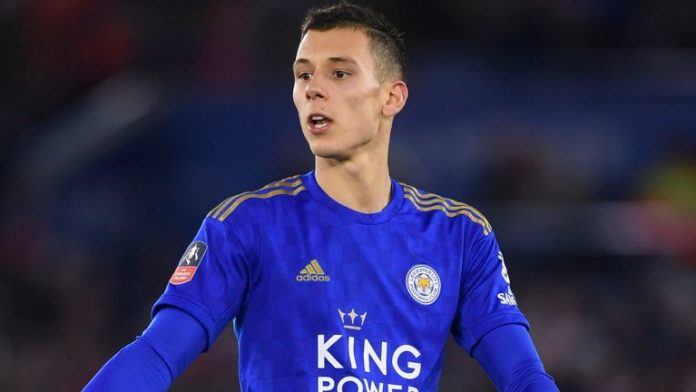 By Ben Grounds at Griffin Park

Kelechi Iheanacho’s close-range finish after four minutes was enough to send Leicester through to the FA Cup fifth round in a battling 1-0 win over Sky Bet Championship side Brentford at Griffin Park.

Ayoze Perez and Marc Albrighton both had chances to extend that lead in the opening period but the Bees produced a valiant second-half performance.

Thomas Frank’s men were the better side after the restart, with Emiliano Marcondes striking the post before substitute Bryan Mbeumo saw his effort ruled out for offside.

“The attitude of the team was first class, we started the game very well,” Rodgers said. “You can see how well Brentford have done this year with the football they played so we knew we had to be focused.”

Man of the match: Emiliano Marcondes.

It was back in 1949 when Brentford recorded its biggest crowd of 38,678 at an FA Cup tie against Leicester. While there were not so many on Saturday -12,221 to be precise – it felt twice as full for the club’s final FA Cup game at the famous old ground.

Brentford boss Thomas Frank made 10 changes for the third-round clash against Stoke following a gruelling Christmas schedule, and the Dane made nine here, with a crucial Championship game with Nottingham Forest on Tuesday taking priority.

That meant the absence of Said Benrahma, Bryan Mbeumo and Ollie Watkins – their front three who account for 77 per cent of Brentford’s goals this season. Frank admitted afterwards that a replay would have been the “worst possible scenario” – and the occasion looked to have got the better of his replacements as inside four minutes, they were behind.

Dennis Praet lasered a superb pass into the path of the overlapping James Justin and the full-back’s cross was tapped home by Iheanacho for his ninth goal in his last nine FA Cup starts.

Brentford looked shell-shocked as Rodgers’ side nearly doubled their lead when Demarai Gray lashed a free-kick into the side-netting, moments after Praet’s stinging shot was blocked by Julian Jeanvier.

Brentford boss Thomas Frank made nine changes as his potent front line of Said Benrahma, Bryan Mbeumo and Ollie Watkins were all missing. Luke Daniels made only his third start of the season in goal.

First sign of life from the hosts came after 16 minutes as Jeanvier’s cross flicked off the head of Caglar Soyuncu to Jan Zamburek. Marcondes was released to his left but could only fire high into the side-netting.

Brentford created trouble of their own making 15 minutes before the break as Luka Racic was dispossessed by Hamza Choudhury, allowing Albrighton to take on the loose ball, only to fire just wide.

Brentford suffered another lapse in concentration as Perez was slipped through the middle by Iheanacho but his shot was straight at Luke Daniels.

Having been guilty at times of showing their Premier League opponents too much respect in the opening period, Frank breathed confidence into his players at the restart and they were by far the better side for the opening 15 minutes of the second half.

Joel Valencia blasted wide when well placed and their courage on the ball was very nearly rewarded just after the hour-mark as Marcondes’ teasing cross from the left struck the foot of the post before Christian Fuchs scrambled the ball clear to prevent substitute Josh Dasilva from having a simple tap in.

Leicester were content to sit back and hold onto their slender lead, but that was so very nearly extinguished with seven minutes remaining. Marcondes was the architect once more as his corner was met on the volley by Racic but his shot was tipped over by Danny Ward.

From the resulting set piece, Leicester’s reluctance to seek a second nearly proved costly as Mbeumo flashed his shot on the volley home but the substitute was correctly flagged offside as the hosts fell just short.

Brentford boss Thomas Frank: “I’m very pleased with the performance. You can’t ask for more. They put everything out there and I’ve praised the players in the changing room.

“They were brave, pressed aggressively and I know they scored early with a bit of brilliance and Premier League class but we created opportunities and at least a draw would’ve been a fair result.”

Leicester boss Brendan Rodgers: “We were aggressive and got the goal but we lacked the precision to get one or two more. Some misplaced passes gave them some impetus but the attitude of the team was first class. Danny made a superb save towards the end and I’m delighted to be in the next round.

“This is a club with a great history so it was really special to be here. Seeing the standing area behind the goal brought you back to real football.”

Man of the match: Emiliano Marcondes

This was a very encouraging performance from a Brentford side consisting of six players from their B team. Despite so many changes, they still had a plan, embodied by Marcondes.

The midfielder is yet to make a Championship start since his return from a loan spell with Midtjylland, but the 24-year-old caught the eye here, adding to his match-winning display over Stoke in the previous round.

The Dane very nearly forced a replay when his devilish cross from the left found its way through to strike the far post, while it was his set piece that led to Racic’s speculative volley.

32 – Brendan Rodgers is unbeaten in his last 32 domestic cup matches with Liverpool, Celtic and Leicester – winning 28 and drawing four since a 1-2 defeat to Aston Villa in the FA Cup semi-final in April 2015. Character. #BRELEI #EmiratesFACup pic.twitter.com/86YDm9qo8K

The draw for the FA Cup fifth round will take place from 7.19pm on Monday. Every tie will be played in midweek, commencing on March 2.

Leicester travel to Aston Villa on Tuesday for their Carabao Cup semi-final second leg, live on Sky Sports Football; kick-off 7.45pm. The Foxes host Chelsea in the Premier League on Saturday at 12.30pm.