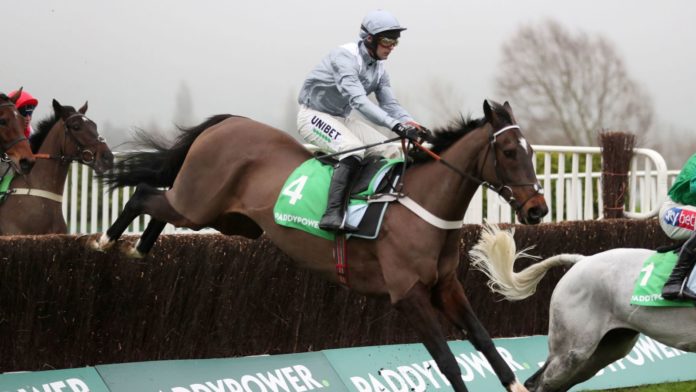 Santini got the better of an exciting duel with Bristol De Mai in the Paddy Power Cotswold Chase at Cheltenham.

The two looked the class acts on paper for the Gold Cup trial and they pulled a long way clear of the others, lead by classy handicappers Top Ville Ben and De Rasher Counter.

For most of the race Bristol De Mai looked the happier of the two, jumping exuberantly out in front for Daryl Jacob.

From some way out Nico de Boinville was niggling on Santini, but when Bristol De Mai stumbled on landing over the third last, Santini was left in front.

However, a slightly slow leap at the penultimate obstacle from Santini allowed Bristol De Mai to retake the lead after jumping the last, looking sure to win at the course for the first time.

Nicky Henderson’s lightly-raced eight-year-old dug deep though, with Santini finding plenty to come home three and a half lengths clear.

Henderson said: “It is one step forward but there is a long way to go. It was 200 per cent better (than Sandown) but to be fair we did cauterize him after that, but I don’t think that had a lot to do with it – ours were just a bit fat.

“He can be a bit like that but this horse absolutely lives and thrives on work. The more you can get into him the better he becomes. He has always been the same.

“When you can’t train him he goes the other way again. You have got to fire work at him. The more you do the better he gets. There is more to come.

“When you consider the race he ran in the RSA last year you have to say he likes the track. I don’t say he dislikes Sandown, he was sloppy at Sandown. He wasn’t wound up and I hadn’t done a lot with him.

“The last three weeks he has just been doing that the whole way and I genuinely believe he can do that again.”