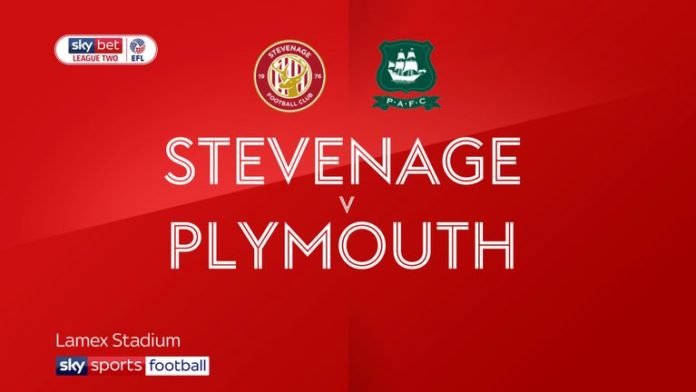 Plymouth fired themselves into the Sky Bet League Two automatic promotion places with a 2-1 win at struggling Stevenage.

The plucky Pilgrims took full advantage of Crewe’s slip-up at Scunthorpe United to move into the top three – whilst Boro dropped back to the foot of the table.

Both sides had early chances to take the lead with the hosts forcing Alex Palmer into a top save through Jake Cassidy before Antoni Sarcevic’s shot trickled wide at the other end.

Argyle hit the front in the 47th minute as Byron Moore coolly finished after being played through by George Cooper.

The match was disrupted in the second half as the ground was plunged into darkness due to a floodlight failure.

Palmer produced a fine stop to tip Charlie Carter’s strike onto the crossbar and keep the visitors ahead.

New boy Ryan Hardie bagged his third goal in as many games as he rounded Paul Farman in the Stevenage goal before firing home in the 77th minute.

Carter pulled one back with eight minutes to go as he nodded home off the post but Argyle held on.