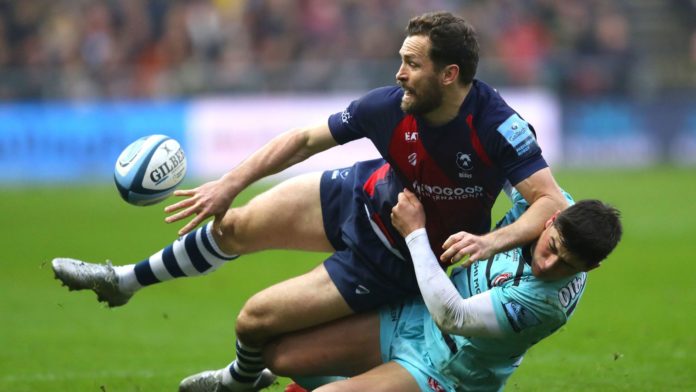 A round-up of Saturday’s four Gallagher Premiership games as Bristol swept aside Gloucester in a derby, Sale won at league leaders Exeter, while Bath and Wasps also picked up wins.

Welshman Callum Sheedy was the victory architect, kicking 19 points, including the conversion of wing Henry Purdy’s try against his former club.

Full-back Luke Morahan confirmed a comprehensive win by touching down 11 minutes from time as Bristol were rewarded for their relentless pressure.

Substitute Mat Protheroe added a third Bristol try – again converted by Sheedy – to put the seal on an impressive display.

Owen Williams booted three penalties for Gloucester, while Billy Twelvetrees converted Freddie Clarke’s late try, but they failed to close the gap on second-placed Northampton after being outgunned in most departments as an 18,700 crowd roared its approval.

Sale put themselves right in contention for a top-two Gallagher Premiership finish after securing only their second ever league win at Exeter.

FULL-TIME | It’s always a tough task at Sandy Park but a resilient Sharks side put the Chiefs to the sword on their own patch, to keep themselves within the top 4#EXEvSAL [19-22] #SharkTime | @UKFast pic.twitter.com/v83uoWftZr

The Sharks’ defending was the key to their 22-19 victory, which was outstanding as they scored all their points in the first half through tries by wing Chris Ashton, No 8 Dan Du Preez and wing Byron McGuigan, with fly-half Robert Du Preez landing a penalty and conversion.

Exeter had one try from full-back Phil Dollman going to the second period but, in the final quarter, No 8 Sam Simmonds and wing Tom O’Flaherty scored touchdowns, with fly-half Gareth Steenson converting both.

Wasps deservedly won a seesaw encounter at Worcester with a strong second-half performance that saw them score 25 points to turn around a half-time deficit.

? A bonus-point win for Wasps!!! pic.twitter.com/GcpqJuVKZ5

They were unlucky to be trailing 13-5 at the interval but tries from Zach Kibirige, Jack Willis and Dan Robson, to add to Jimmy Gopperth’s first-half effort, saw them to victory, with Billy Searle adding two conversions and two penalties.

Duncan Weir celebrated his recent call-up to the Scotland squad by scoring 16 points. He kicked four penalties and converted the tries scored by Marco Mama and Ollie Lawrence.

Tom Homer snatched a 13-10 victory for Bath over Leicester with his second try 11 minutes from time.

The Blue, Black and White edge it here at the Rec. pic.twitter.com/vXNwFLAEgP

Homer had started the game at full-back, crossing for an early try, but showed he is no slouch as a left wing when scoring his second to sink the Tigers.