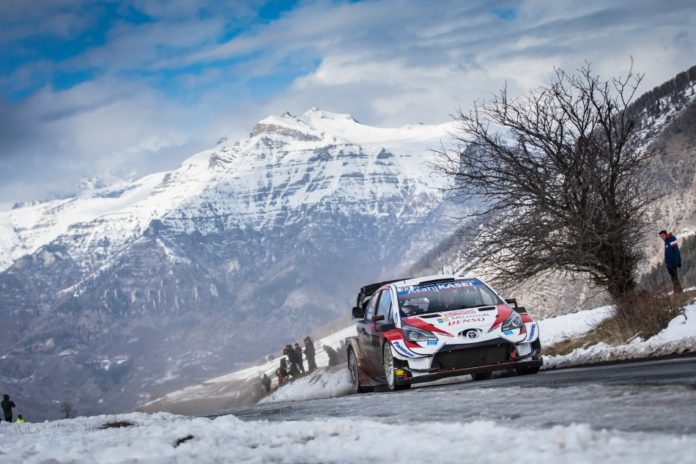 At the end of Saturday, Elfyn Evans leads Rallye Monte-Carlo by 4.9 seconds, ahead of his team-mate Sébastien Ogier. Thierry Neuville dominated the afternoon loop to close on the lead duo. Ahead of tomorrow’s four final stages, only 6.4sec separate the top three.

Evans was lucky to survive a brief excursion on the final stage of the day, when he was “too optimistic with the throttle”, and said he would be more cautious tomorrow. Despite this, he maintained the lead he had built in the morning and successfully navigated the tricky conditions of the afternoon’s loop of stages, which was identical to the one run in the morning.

Some of the snow and ice had melted in the warmer temperatures, offering drying conditions and a bit more grip for the second pass, however not consistently with ice patches remaining at some places.

Starting the afternoon loop just 4.8sec behind his team-mate, Ogier went second fastest in SS14, which left both drivers tied on times at the top ahead of the final run of the day.

Thierry Neuville showed impressive pace in his Hyundai, claiming three stage wins out of four today to end Saturday only 6.4sec behind the leader. The Belgian was pleased with his driving, saying that he was able to attack with a lot more confidence, thanks to the work with the safety crew and the improvements made to his pace-notes.

Despite losing time with a spin, Sébastien Loeb is still fourth in his i20 Coupe WRC but is now more than two minutes behind the fight for the podium and under threat of M-Sport Ford’s Esapekka Lappi, who is on his heels 14.1sec behind.

Lappi holds an advantage of 46sec over Toyota’s youngster Kalle Rovanperä, who continued to impress on his WRC debut.

Behind the two Finns, Japan’s Takamoto Katsuta reclaimed seventh place overall in his Toyota Yaris WRC, ahead of Frenchman Eric Camilli, still leading the FIA WRC 3 class. Norwegian driver Mads Østberg is ninth overall and in the lead of FIA WRC 2 in a Citroën C3, ahead of France’s Nicolas Ciamin.

The final day of Rallye Monte-Carlo will feature four decisive stages in the mountains above the Principality.