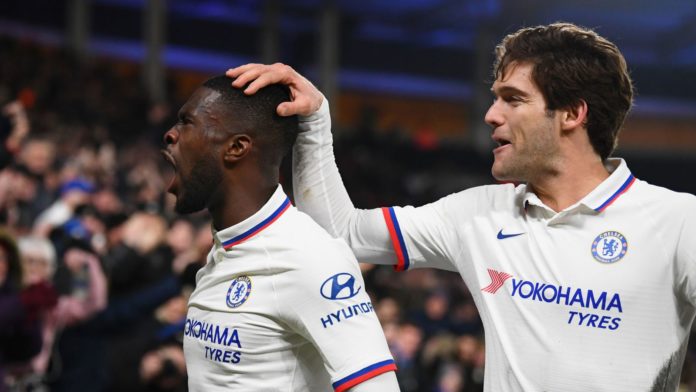 Goals from Michy Batshuayi and Fikayo Tomori helped Chelsea hold off a late Hull fightback with a 2-1 win in the FA Cup fourth round.

Batshuayi’s sixth-minute deflected opener set Chelsea on their way to a dominant opening half where they passed up a number of chances to add to their lead, and found home goalkeeper George Long in inspired form.

Hull improved after half-time but a sucker-punch second looked to have sealed Chelsea’s path when Tomori headed in Ross Barkley’s free-kick just after the hour mark.

But with 12 minutes to go, substitute Kamil Grosicki’s free-kick took a massive deflection off Mateo Kovacic’s boot to find the far corner and give the hosts a lifeline.

Man of the match: George Long

The Sky Bet Championship side pushed for a late equaliser in front of a sell-out home crowd but could not test Willy Caballero any further, as Chelsea progressed to round five for the fifth season in a row.

Chelsea get job done to reach Round Five

Hull – FA Cup finalists in 2014 – had shown little to suggest they could spring an upset at the KCOM Stadium, where they had lost five times this season and both of their last two home game, but in front of a first sell-out crowd in almost six years, they started brightly.

The air of anticipation on Humberside lasted only six minutes; a fortuitous opener set the tone for the rest of a half of Chelsea domination, as Mateo Kovacic’s raking pass found Cesar Azpilicueta on the right, and his cross towards Mason Mount was turned inside to Batshuayi, whose effort looped over Long courtesy of a major deflection.

Kovacic was given time on the ball throughout and took full advantage of it, threading a lovely ball into Mount who was denied by a smart Long save on the half-hour, with the Hull ‘keeper already denying Barkley from a similar distance.

Moments before the break Hull saw their first sniff of goal when Tom Eaves controlled a Herbie Kane ball on his chest, turned and shot but Azpilicueta’s block took the sting out of his effort.

Hull re-emerged for the second half as brightly as they had the first, but this time kept up their front-foot mentality and gave Jarrod Bowen far more of the ball.

He looked dangerous from the off and pulled a foul – and a yellow card – out of Kovacic on the run with less than a minute of the half gone, but Kane’s effort was always curling away from the near post.

Hull City made four changes from their last game, including bringing in Tom Eaves and Mallik Wilks for a first start.

Bowen was in full flow again after robbing Kovacic in midfield on the hour mark and got to the edge of the area before firing over.

A palpable feeling among the home fans that Hull could spring a surprise was extinguished moments later when Tomori met Barkley’s excellent free-kick with a free header down into the ground and past Long, before celebrating with the away fans behind the goal.

But as the game entered its final stages, a soft free-kick given against Marcos Alonso for a foul on a Josh Magennis, for which there was very little contact, allowed Grosicki to aim a shot goalwards, which Kovacic turned away from before deflecting into his own net.

The stadium was finally rocking as it had been before kick-off, and Hull pushed men forward with time running out as they sought out a late leveller.

But the cup fairytale was ended by a resolute Chelsea backline who held firm to deny them any further clear-cut chances, as the Blues progressed into round 5, and will find out their opponents on Monday at 7.20pm. Follow the action on skysports.com or via the Sky Sports app.

Man of the match – George Long

Without their goalkeeper in such inspired form, Hull would have been dead and buried by half-time but the quality of Long’s performance kept them in the game, with two excellent saves from Mount and Barkley – the second a wonderful instinctive left-handed stop – denied Chelsea a more comfortable half-time lead.

After the break he had less to do but was helpless with Tomori’s header for the second goal, and went about his business confidently all night.

Hull host Huddersfield on Tuesday at 7.45pm, while Chelsea visit Leicester next Saturday at 12.30pm.