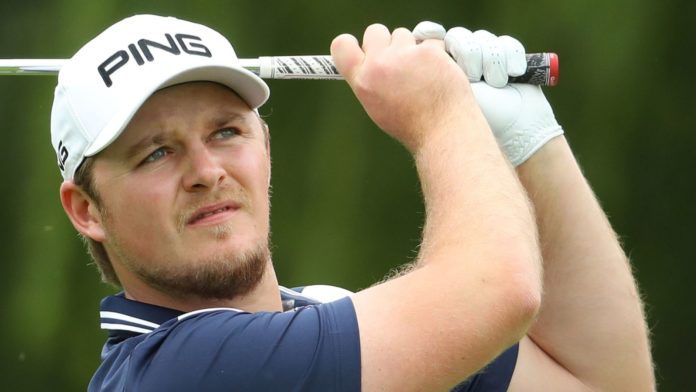 Watch the final round of the Omega Dubai Desert Classic on Sky Sports Golf. Live coverage begins on Sunday morning at 8:30am.

Eddie Pepperell hinted that he is not expecting much in the way of conversation with Bryson DeChambeau as he prepares to play alongside the American in Dubai.

Pepperell has been critical of DeChambeau on social media in recent months and created a stir when describing him as “a single-minded twit” in August last year as he hit out at DeChambeau’s pace of play at The Northern Trust.

The charismatic Englishman later apologised for his comment, but he took aim at DeChambeau again late last year following his dig at Brooks Koepka’s physique, accusing the world No 1 of not having any “six-pack abs”.

Koepka responded with a picture of his four major trophies accompanied by the message: “You were right, I am two short of a six-pack”.

Just look at Tommy and Justin, both looking completely bored. Slow players do this to their playing partners making the game less enjoyable. Problem is, the unaffected single minded twit in this instance, doesn’t care much for others.

Pepperell weighed into the conversation with: “This is why you just don’t go after the No 1 golfer in the world”, although DeChambeau has since insisted his “rift” with Koepka was nothing of the sort and claimed the pair got on well.

The various comments from Pepperell will not have gone unnoticed by DeChambeau, and there will be much interest in the interaction – or lack of – between the pair when they head out together in the third-last group in Sunday’s final round, live on Sky Sports Golf from 8:30am.

Shortly after the final-round pairings were confirmed, Pepperell took to Twitter again and suggested the superior distance of DeChambeau could be useful in avoiding awkward conversation during the round.

Fully understand if Bryson wants to keep hitting it 40 past me tomorrow so we don’t have to chat.

DeChambeau is two shots off the lead overnight with Pepperell one further back, and the defending champion is determined to defy an apparently worsening illness to retain his title.

“I’m feeling worse today,” DeChambeau said, who has been battling a virus over the week. “I couldn’t hear anything out of my right ear until the 13th hole, when it finally popped and that was helpful a little bit.

“Being under the weather and fighting through some of the stuff that happened last week and persevering this week would be a tremendous honour.

“I’m actually hitting it surprisingly well right now. I figured something out on Friday night and I implemented it today and it worked beautifully, it was just a couple distance control things that kind of threw me off.

“So I’m going to go work on that, work on some putting, speed control, speed control was not good today and got to make sure that’s taut tomorrow.”