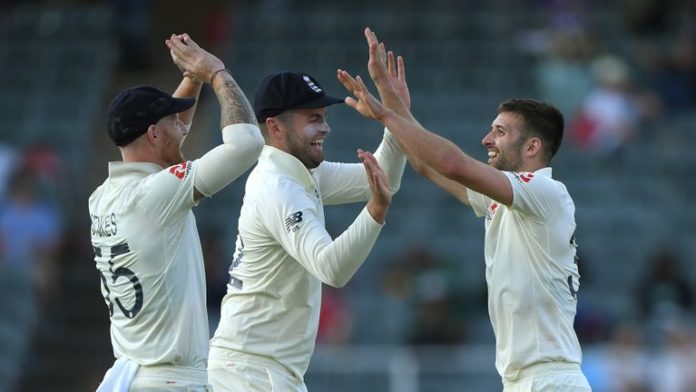 Watch day three of the second Test between South Africa and England, live on Sky Sports Cricket from 7.30am on Sunday

Nasser Hussain says South African cricket appears to heading in “one direction, and it’s not a good direction” after they crumbled to 88-6 in reply to England’s first-innings 400 on day two of the fourth Test in Johannesburg.

South Africa started the series in impressive fashion, pulling off a fine 107-run win over England in the first Test in Centurion, but they have since succumbed to heavy defeats in Cape Town and Port Elizabeth and are seemingly heading for another at The Wanderers.

On Saturday, Mark Wood (35no off 39 balls) and Stuart Broad (43 off 28) shared in an 82-run stand for the final wicket, smashing the South African attack to all parts to lift England up to 400, while Wood then took 3-21 with the ball to run through the home side’s top order.

Asked if South Africa showing enough fight on day two, Hussain told Sky Sports: “It’s hard to fight when you’re not as good as the opposition.

“I think that is what was lacking yesterday, as a bowling unit, they just looked very, very nice. They didn’t look like your typical hostile South African side.

“Plus they’ve got batsmen who are lacking technically in certain areas, being found out outside their off stump.

“Dean Elgar has surprised me in this series a little bit. He is someone who does show a lot of fight, a lot character, but he has fallen to some really soft dismissals; the way he played spin in Cape Town and the way he got out to Ben Stokes today.

“It’s almost like he has been dragged down by the inadequacies of others. And if you’re not being pushed for your place – you know 20s or 30s mean no-one will come in for you – that’s a very dangerous place to be.

“They seem to be lacking batting depth and bowling depth. And, add to that, the fact that [Vernon] Philander is going [retiring after this Test], and [Faf] du Plessis might be going, then South African cricket is only going in one direction, and it’s not a good direction.”

Graham Gooch and Robert Croft also weighed in on South Africa’s struggles – as well as Wood’s brilliance, Joe Root’s continued conversion problems, and Stokes’ ICC punishment – on the latest podcast of The Cricket Debate, which you can listen to in the player below or by downloading the podcast here.

As for England’s stunning display on the second day in Johannesburg, Hussain believes it is the best he has seen the side bowl in a long while, but added he doesn’t see them enforcing the follow-on on Sunday.

“The spell after tea was as good as I’ve seen England bowl for a very, very long time,” he added.

“Their control, Chris Woakes at one end – he went past the outside edge about six times – and then Wood at the other end, hitting [Pieter] Malan a couple of times on the chest and setting him up perfectly for the full delivery which he nicked.

“There were no freebies. It was only Quinton de Kock who came out and looked like a proper Test match player, apart from that, it looked a little bit like men against boys.

“England are 2-1 up in the series, on a pitch that gets uneven. If they absolutely roll them out tomorrow for 120, then maybe [they enforce the follow-on].

“But, the pitch is going to go up and down, you’ve got bowlers you want to rest – Wood has a sore rib – and so they’ll take some convincing to go again.

“Bat again, smash their bowlers around and get a massive lead, their heads will go down and then I think you’ll roll them anyway in the second innings.”

Watch day three of the fourth Test between South Africa and England, in Johannesburg, live on Sky Sports Cricket from 7.30am on Sunday.