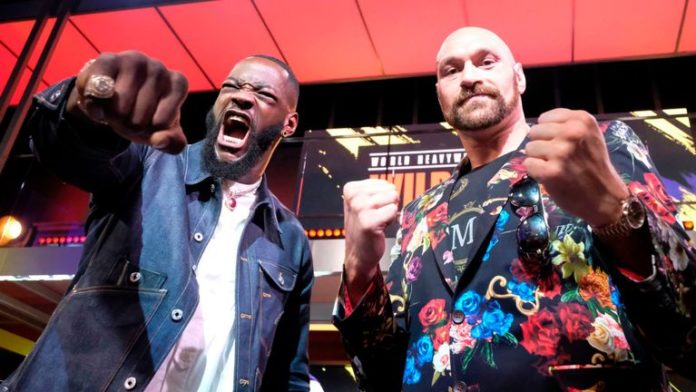 “Tyson has pillows as fists. He has skill but you can’t have it all”

Deontay Wilder has accused Tyson Fury of having “pillows as fists” and claims he was never hurt in their first fight.

The heavyweight rivals went face to face on Saturday night at a press conference in Los Angeles before their rematch on February 22, when Wilder defends the WBC championship.

Wilder admitted that he was confused by Fury’s bold prediction of a two-round knockout, saying to Fox: “Their strategy? I don’t know how to take it. Are they trying to throw me off my game?

“I don’t know what he will do. He’s crazy, man. If he believes in it, I must take his word for it. But it’s different when you step in the ring. I’m the biggest puncher in boxing history.”

Wilder insisted it isn’t possible for Fury to back up his promise of a swift stoppage win. The champion said about Fury: “I don’t think so. We haven’t seen that displayed. I didn’t feel [his power].

“I think Tyson has pillows as fists. He has skill but you can’t have it all.

“Of course, it would play into my game-plan [if Fury aimed for a two-round knockout win] because when you come forward, you give me more momentum to land a shot.”

Fury interrupted: “If I put my chin in front of him and said: ‘KO me please, Deontay’. I’m hardly going to do that. I’ve got to back him up, put him on the back foot.”

Fury again insisted he would beat Wilder inside two rounds: “I stand by that wholeheartedly. In the first fight I used my boxing skills and it didn’t work. I didn’t win. I’m about winning.

“We’re giant heavyweights and I’ve had 20 knockouts in 29 victories. I’m very capable of knocking people out. When you underestimate someone’s power, you come unstuck.

“He is a much bigger one-punch knockout artist than me. But nobody can match me with heart and determination. I will put my iron will on Wilder.

“I’m not afraid to go mano a mano with the biggest puncher in heavyweight boxing.

“It doesn’t matter if you win 11 and a half rounds against Wilder with 30 seconds left because he can KO anybody.”

Wilder threatened: “I am blessed with power. It’s his job to stay away. Thirty-six minutes he has to avoid me.”

Fury spent long periods out-boxing the defending champion in their first fight 13 months ago, but Wilder knocked him down twice including once in the final round. Fury dramatically survived and both men were frustrated by the draw.

They remain unbeaten in a combined 73 fights, and each won two fights in 2019 since their original meeting.

Wilder criticised the significant changes in Fury’s camp: “Everybody wants to be the head trainer, everybody has the remedy, the right set of ideas. I can only imagine a camp with so many chiefs.”

Fury replied: “I needed to get an edge. It’s not personal between me and these trainers, it’s business. If someone else can improve my business then I’ll bring them in.

“I’m still the same old G. Everybody knows me. There’s not much I can hide. I won’t box like a light-welterweight or like Deontay Wilder. That can’t happen.”

Fury revealed the “difficult” decision to ditch Diet Coke during his training camp then, when Wilder questioned his ‘lineal’ champion status, he said: “The belt I’ve got on is Gucci.”

Two face-offs book-ended the press conference. The first was lengthy and, when Fury cracked a smile first, Wilder shouted: “You lost!”

Fury replied as Wilder took his seat: “I lost? You walked away!”