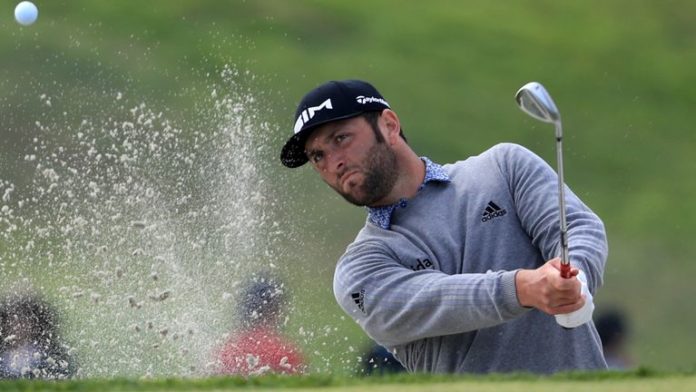 Watch the final round on Sky Sports Golf. Live coverage begins on Sunday at 6pm

After the start of play was delayed for two hours by thick fog shrouding the California coastal resort, Rahm got off to a hot start and kept the mistakes at bay in a classy 65 that earned him the outright lead on 12 under par.

McIlroy produced a spirited response to his frustrating back-nine 39 on Friday as he covered the inward half in six fewer shots to post a 67 which lifted him to nine under, while Woods was unable to build on an outward 32 as 69 left him five off the pace.

Rahm, the 2017 champion, made immediate strides up the leaderboard when he rolled in a 20-footer for birdie at the first and then holed a 110-yard wedge for a thrilling eagle at the second as he raced to eight under.

The Spaniard got up-and-down for birdies at the par-five sixth and ninth holes to cap a front-nine 31, and two smart bunker shots at 12 and 13 earned him a par and a birdie respectively before he scrambled two further pars from tricky positions on the next two holes.

Rahm then drilled his tee-shot to three feet at the tough par-three 16th and converted for his fifth birdie of the day, and two closing pars ensured he would end 54 holes with sole possession of the lead.

Overnight-leader Ryan Palmer, who blitzed the North Course for a 62 on day two, produced a real mixed-bag of scoring over the first half of his third round as he began with three pars and offset three bogeys with as many birdies over the next six holes.

The veteran was much steadier after the turn and ground out eight pars and a welcome birdie at the 17th which got him under the card for the day, and a safe par at the last completed a 71 which gave him outright second – one behind Rahm and two clear of a resurgent McIlroy.

The world No 2 missed only two greens in regulation thanks to some awesome ball-striking, and not just from the fairway, although he did pass up a number of birdie chances as his putting did not match the consistency of his iron-game.

But he still managed to make six birdies against one bogey at the fourth, and the errors which crept into his game late on Friday were a distant memory 24 hours later, with birdies at 12, 15 and 18 enough to secure a place in Sunday’s final group alongside Rahm and Palmer.

“If you’re not making that many birdies but keep giving yourself chances, it’s one of these golf courses that you feel like you’re playing really well, you might be a couple under,” McIlroy said.

“That’s OK. No one else is going that low. Keep doing the same thing tomorrow and should be right there.”

Woods, still trying hard to retain his focus in his quest for a record 83rd victory on the PGA Tour, spent time in his car with the heater on to stay warm during the fog delay, and he wasted little time in whipping the fans into a frenzy when he birdied two of the first three holes.

He maintained his bid for history with a chip-in to save par at the fourth, and further birdies at six and nine got him to within two of the lead at the turn before he faltered down the stretch for the second day running.

The 44-year-old three-putted from 60 feet to drop a shot at the 11th, and he barely gave himself a chance to repair the damage over the closing seven holes and did well to scramble a par at the last when, after over-hitting a wedge into the back bunker and splashing out to 15 feet, he rattled in the putt to stay at seven under par.