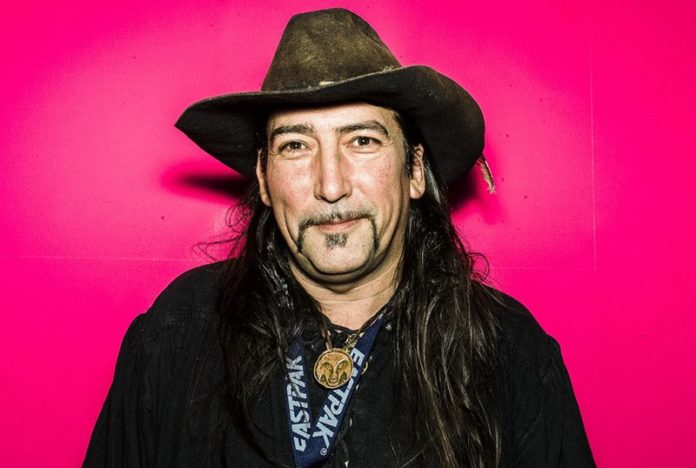 CS Interview: Richard Stanley on his passion project Color Out of Space

It’s been over 20 years since Richard Stanley last stood behind the camera for a feature-length project and now the time has finally come for his return in this year’s adaptation of the H.P. Lovecraft short story Color Out of Space starring Nicolas Cage (Mandy). Ahead of the film’s theatrical release, ComingSoon.net got the chance to talk with the South African director to discuss the long-gestating project.

RELATED: Color Out of Space Review

Written and directed by Stanley (Hardware), Color Out of Space is described as a story of cosmic terror about The Gardners, a family who moves to a remote farmstead in rural New England to escape the hustle of the 21st century. They are busy adapting to their new life when a meteorite crashes into their front yard. The mysterious aerolite seems to melt into the earth, infecting both the land and the properties of space-time with a strange, otherworldly color. To their horror, the Gardner family discover that this alien force is gradually mutating every life form that it touches… including them.

The film is director Stanley’s comeback film since his dismissal from the 1996 H.G. Wells adaptation of The Island of Dr. Moreau, as chronicled in the brutal documentary Lost Soul: The Doomed Journey of Richard Stanley’s Island of Doctor Moreau.

RELATED: Cage to Play Cage in The Unbearable Weight of Massive Talent

Stanley describes himself as a “lifelong Lovecraft fan,” remembering back to his childhood years of seven and eight when his mom read the stories from the acclaimed author to him, and his desire to film Color came to him at the young age of 13.

“Color is kind of the low-hanging fruit of the Lovecraft tome,” Stanley describes. “For us, it’s kind of easier to access as filmmakers, you don’t have to go to the bottom of the Mariana Trench or go to Antartica. I’m a fan of Stephen King’s Creepshow segment “The Lonesome Death of Jordy Verrill,” which is probably one of my favorite adaptations of the story.”

With this adaptation, Stanley not only sought to remain faithful to the story itself, but also to the style of the author’s works, the very “cosmic horrors” that notoriously emanated from Lovecraft’s mind onto the pages of his short stories.

“That was the element we strove for in his stories, and it felt to me that none of these adaptations had really gone there, when it came to trying to reveal the glimpses of humanity’s true position in the universe,” Stanley said. “That was a very conscious aim on both my behalf and the producers of the film. I think the creature design in the film comes the closest to Lovecraft. He specialized in ways to eliminate all possibilities of human life by any way you can think of, be it vaporizers or what have you to take human life out completely. So I’d imagine that’s fairly close to where Lovecraft’s stuff was coming from.” 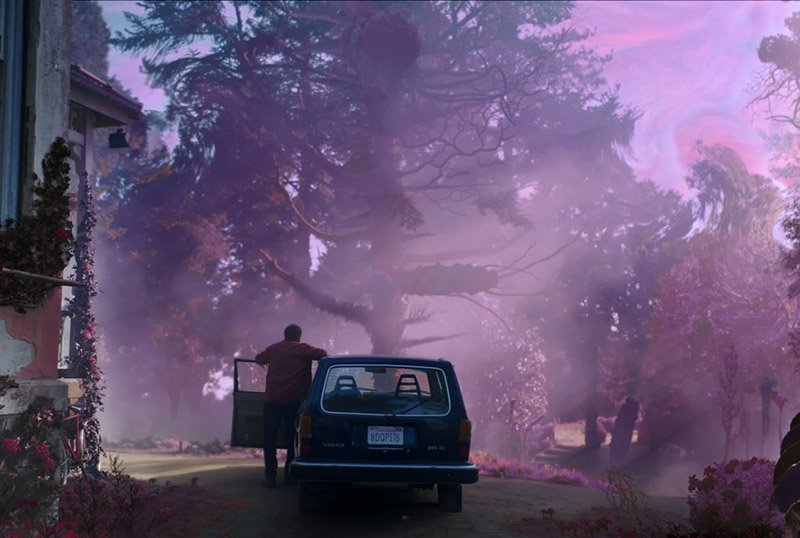 Though seeking to remain true to the source material, Stanley and company did make a few changes and updates to the story, including having daughter Lavinia practice witchcraft off in the woods and the family be big city transplants versus the simple farmers as they were in the story. The director says these changes are all key to the themes.

“I’ve always been keen to portray the way that magic works with hands and spells and sorcerers and witch doctors, which are always portrayed as the bad guys,” Stanley said. “With Lavinia, it shows a potentially well-meaning witch and is exploring if magical dabbling has any effect whatsoever, and it doesn’t seem to protect her from the color. Part of the logic throughout was to try to make Lovecraft potent again by reconnecting the old ones to the unspeakables, Lovecraft’s abominations to present day consumptions. I felt that we would almost be doing it justice by updating the story, and that setting it in the 1920’s or the 19th century was rather dangerous, the material remaining quaint or at a distance from us. I wanted it to feel different from the old ones, the Lovecraftian worldview is a clear and present danger to us now as it is to past generations and generations to come.”

Lovecraft’s original story has spawned numerous similar stories and adaptations, including acclaimed novel Annihilation and its similarly praised film adaptation in 2018. Stanley says his crew chose to act as though they never heard of the film while developing their project.

“When Annihilation came out we were already so far ahead on Color that we pretty much decided to ignore it,” Stanley said. “I will say that the one thing that Annihilation did that influenced us while making ours was to play the film as a proper black comedy. I just felt they weren’t getting enough laughs in Annihilation. We’ve been advocates for a while, and I pitched Color as probably ‘Annihilation but shorter’ and ‘more colorful than The Lighthouse.’”

One of the biggest assets Stanley had going into the making of the film was the production company Spectrevision founded by Elijah Wood (Come to Daddy), Daniel Noah and Josh C. Waller, which helped fund the film and left Stanley to his devices while bringing the project to life. They’re also developing two followup films including a potential “Dunwich Horror” adaptation, which was previously adapted in 1970 starring Dean Stockwell.

“It was very fortunate to find Spectrevision and companies that also have faith in the basic premise of being faithful to bringing Lovecraft to the screen,” Stanley said. “They understood that meant that the film was never going to have a conventional dramatic arc in the manner we’d expected. There were other things, chances, that Spectrevision took with me on this and ultimately I hope it will payoff and I’m certainly grateful for this. This time it will not have Dean Stockwell involved, but yeah we’re trying to crack it right now and it takes place in the same world as Color and it takes place in a future MAGA-era Harlan County. It gives us the opportunity to go back on campus to Miskatonic University for the first time since Re-Animator and to see the university and to get into the rare books section, take a look at the allegedly real economics of it all. The only character that is going to continue throughout the whole thing is Elliot Knight’s Ward character.”

While Stanley would like to see Cage return for the next film in a similar vein to Vincent Price’s work in the Roger Corman-Edgar Allen Poe film cycle, he cautions that he doesn’t “want to say too much about the casting right now,” but still praising the star for the “comic timing” that he brings to each scene, even in the ones that don’t call for it, that “is pretty unique.” In Color the director even threw in a little easter egg for fans familiar with the star’s unrealized Superman project that would’ve been helmed by Tim Burton!

Stanley became notorious in the film industry following his firing from the 1996 The Island of Dr. Moreau a mere three days into production, and the film itself became riddled with production issues surrounding star Marlon Brando (The Godfather). The director decided to also throw in a nod to the actor by featuring clips from the 1961 western One-Eyed Jacks, which Brando both directed and starred in, happy that he “finally got to work with Brando.”

Color Out of Space is in theaters and on VOD now! 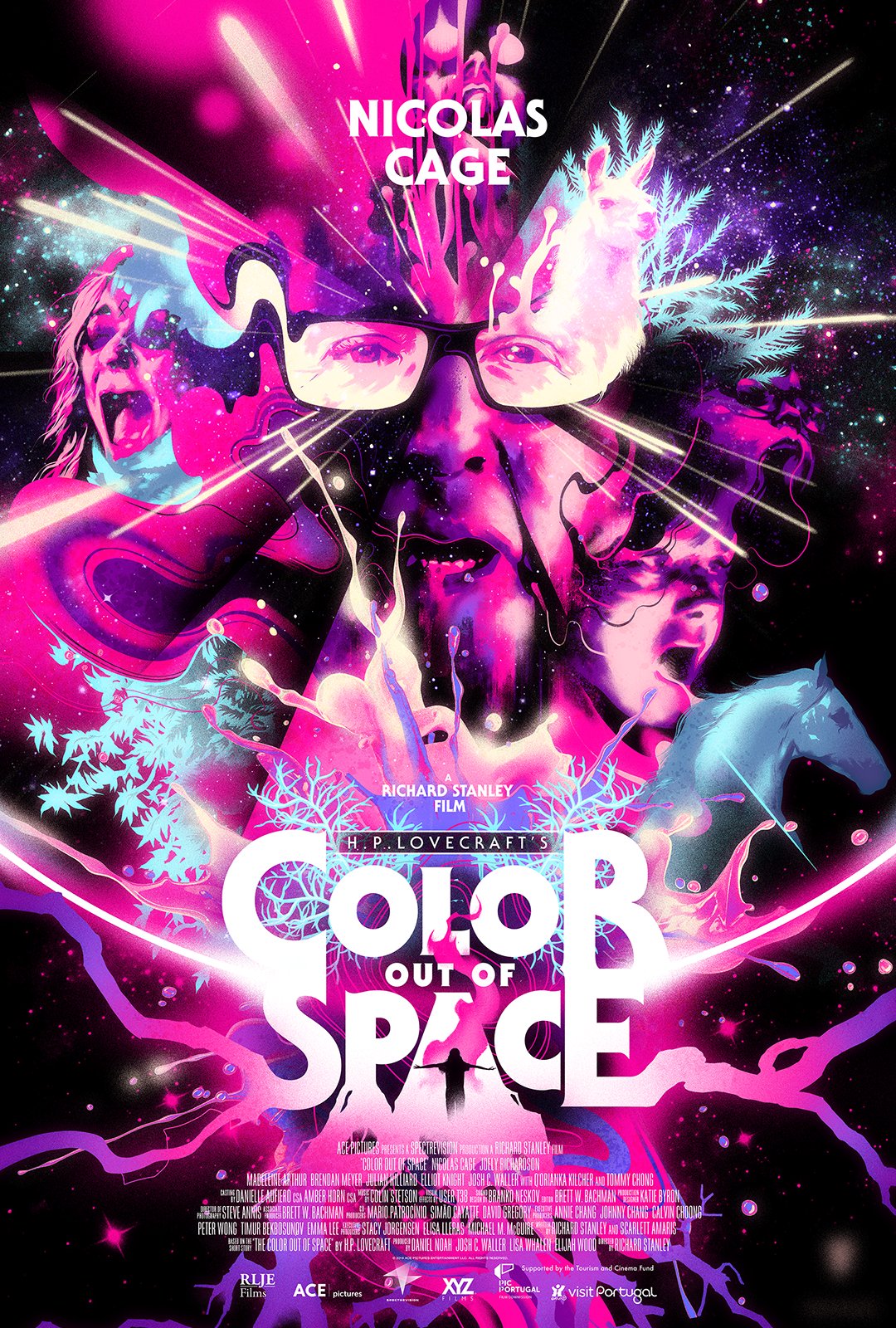