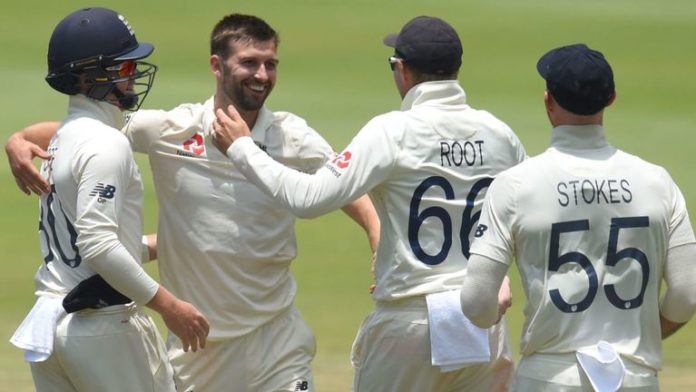 Mark Wood (5-46) claimed a second Test five-for as England bowled South Africa out for 183 in their first innings, but they have opted not to enforce the follow-on, with a lead of 217 runs.

Though England were successful in taking South Africa’s final four wickets in the first session on day three in Johannesburg, they didn’t have things all their own way, as Quinton de Kock (76) struck a fine fifty and put on 79 for the eighth wicket with Dwaine Pretorius (37).

Chris Woakes (2-38) struck four balls into the day, Vernon Philander (4) serving up a leading edge to Stuart Broad at mid-off but, far from triggering another collapse from the Proteas tail, De Kock and Pretorius cashed in as the pitch appeared to flatten out – encouraging for England ahead of their second innings.

Ben Stokes (2-47) broke the partnership – Pretorius steering an edge to gully, where Zak Crawley took a fine catch – before Wood blasted out the final two South African batsmen on the stroke of lunch.

Wood (5-46) first broke De Kock’s resistance, clean-bowling him with a blistering 90mph delivery that broke the bail, and then got No 11 Dane Paterson (4) nicking off to secure his second five-wicket haul in Tests.

Watch continued coverage from day three of the fourth Test between South Africa and England, live on Sky Sports Cricket.