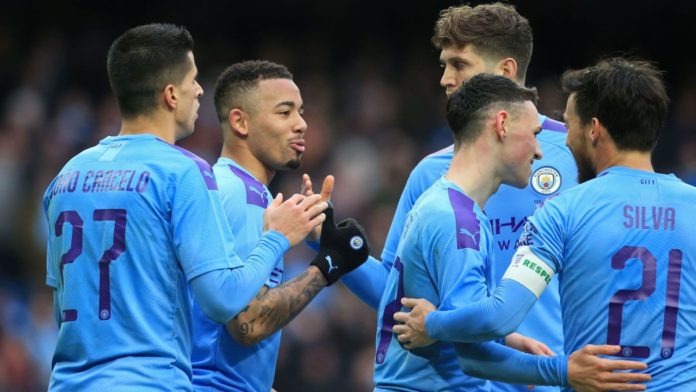 FA Cup holders Man City book their place in fifth round draw, which takes place on Monday before Bournemouth vs Arsenal

Manchester City cruised into the fifth round of the FA Cup with a 4-0 victory against 10-man Fulham at the Etihad Stadium.

Pep Guardiola’s side’s task was made much easier in the sixth minute when they were awarded a penalty after Tim Ream brought down Gabriel Jesus in the box. The Championship side were dealt a further blow as Ream was shown a straight red card, while Ilkay Gundogan made no mistake from the spot (8).

Bernardo Silva doubled City’s lead in the 19th minute when he twisted and turned on the edge of the box before finding the bottom corner from 20 yards.

It took the hosts until the 72nd minute to further extend their advantage but two goals in three minutes from Gabriel Jesus (72, 75) added a flourish to the scorline as City kept the defence of the trophy they won last May firmly on track.

How City kept their FA Cup defence firmly on track…

Fulham contributed to their own downfall at the Etihad Stadium with a number of mistakes, not least Ream’s disastrous early intervention.

Jesus was played through by Gundogan but before the Brazilian could shoot he was pulled back from the shoulder by Ream. Referee Kevin Friend immediately pointed to the spot and brandished the red card.

Man of the match: David Silva.

Gundogan rolled the penalty into the bottom corner and City piled on the pressure with Angelino, Riyad Mahrez and Phil Foden all going close.

The inevitable second goal came after 19 minutes. At first it seemed the chance may have gone for Bernardo Silva as he was forced out of the area but his footwork tricked the defenders. He created space with a smart turn and then clipped a shot into the bottom corner, registering City’s 100th goal of the season in the process.

Pep Guardiola made eight changes to his Manchester City side as the holders hosted Fulham in the fourth round of the FA Cup. Veteran David Silva and experienced pair Bernardo Silva and Ilkay Gundogan were among those to come in, along with youngsters Phil Foden and Eric Garcia. As in previous domestic cup games this season, Claudio Bravo played in goal. Raheem Sterling, Kevin De Bruyne and Sergio Aguero were on the bench.

Fulham handed a debut to loan signing Terence Kongolo but were without a handful of players including Aleksandar Mitrovic, Harrison Reed, Aboubakar Kamara, Anthony Knockaert and Maxime Le Marchand.

City then eased off the gas but Fulham were almost caught out again by another break and Joe Bryan resorted to a cynical foul to halt a Mahrez charge.

Mahrez fired over early in the second half and was taken off soon afterwards, perhaps to get some rest ahead of Wednesday’s derby.

But there was no respite for Fulham as Sterling came on to replace him and struck the bar within minutes of coming on after being played in by David Silva.

David Silva then set up Jesus but Terence Kongolo, making his Fulham debut after moving on loan from Huddersfield, denied him with a fine tackle.

While that was a good moment for Kongolo, he had one to forget in the 72nd minute when he was dispossessed by Bernardo Silva. The ball was worked back to Joao Cancelo and his precise cross was headed firmly home by Jesus.

Fulham made almost the same mistakes again moments later, this time Michael Hector gifting the ball to Jesus. He played in Foden, whose shot was saved by Marek Rodak, but the Brazilian followed up to head in from close range and complete the job.

11 – Gabriel Jesus has been directly involved in 11 goals in eight appearances in the FA Cup, scoring seven and providing four assists. Opportunist. pic.twitter.com/LR2KtjBpjY

City may be out of Premier League title contention but they have no intention of giving up either of the other two domestic trophies they won last season easily.

Their goals took their tally to the season in all competitions to 102 and put them in good heart for the second leg of their Carabao Cup semi-final against Manchester United in midweek.

Manchester City are in Carabao Cup action in midweek. They face Manchester United in the second leg of their semi-final at the Etihad Stadium, live on Sky Sports; Kick-off 7.45pm.

Fulham are back in Championship action next Saturday when they host Huddersfield at Craven Cottage; kick-off 3pm.