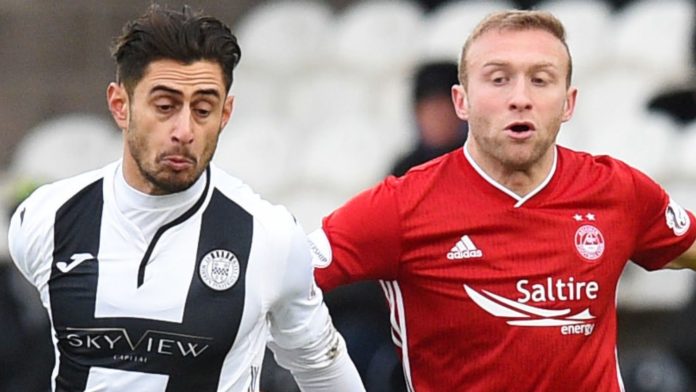 Aberdeen failed to close the gap on third-placed Motherwell as they played out a drab 0-0 draw at St Mirren.

The Dons saw plenty of possession at The Simple Digital Arena but failed to create any clear-cut chances on a frustrating afternoon for Derek McInnes’ side.

It was Saints who went closest to breaking the deadlock as Jonathan Obika hit the inside of the post following a misplaced backpass from Dylan McGeouch in the first half.

Man of the match: Conor McCarthy

The story from a frustrating afternoon in Paisley

After St Mirren had a Junior Morias shot blocked and saw Tony Andreu scuff the ball wide in the opening two minutes, the game settled into a pattern of Aberdeen dominating possession without ever threatening the goal.

Two poor kicks from Vaclav Hladky nearly put his side into trouble, but a good Akin Famewo tackle sniffed out the first opportunity before the keeper bravely claimed a cross second time around.

Lewis Ferguson and Scott McKenna both had shots blocked, the latter’s effort looking destined for the top corner following a knockdown in the box, only for the impressive Conor McCarthy to get his body in the way.

St Mirren made two changes as Paul McGinn and the injured Kyle Magennis were replaced by Tony Andreu and Ilkay Durmus.Aberdeen boss Derek McInnes handed a debut to Matty Kennedy after his move from St Johnstone, with Jon Gallagher dropping to the bench.

The best chance of the game came five minutes before the break. Dylan McGeouch tried to play the ball back to Joe Lewis, but didn’t see Obika lurking and the striker was through on goal. Obika took the chance early as Lewis rushed off his line, only to see his effort bounce off the post and clear of the goal.

That was as good as it got for either side in front of goal. Ilkay Durmus had an effort deflected into Lewis’ hands, while Sam Foley volleyed over the bar from a knockdown. Aberdeen were dominating the ball but Saints went close on the break again as Durmus fired just over the bar from the corner of the box with a fierce strike.

The Dons looked the side most likely to find the breakthrough in the final 20 minutes. Matty Kennedy perhaps took the wrong option when he was slipped through by Ryan Hedges, opting to cut it back for Scott McKenna rather than squaring it to the back post and Hedges then failed to get a proper connection on an effort from inside the D.

Funso Ojo’s speculative effort from 30-yards in the 87th minute was the final chance and the boos from the away end at full-time told the story after a hard-fought game that will not live long in the memory of anyone who watched it.

Man of the match

Irish youngster Conor McCarthy took his place in the centre of defence for the third successive game after moving from Cork City and kept one of the Scottish game’s best strikers quiet throughout.

Akin Famewo was impressive alongside him but McCarthy stood out as he battled hard, made important blocks and showed a maturity beyond his 21 years. Perhaps a little lucky not to give away a penalty in the first half, although the contact on Cosgrove looked outside the box, but it looks like Saints have picked up a gem.

St Mirren boss Jim Goodwin was thrilled with the resilience of his side against Aberdeen.

“I’m delighted with the players and I’ve told them that,” he said. “We’ve stood up to everything that Aberdeen have thrown at us. Set plays are a big part of their game and we’re not the biggest team in the world. I thought the two young centre-halves in particular playing against one of the in-form strikers in the league, managed him really well and denied him any clear real opportunities.

“In terms of that side of it, the dogged side of it, I thought we all done really well. What we didn’t do well was going the other way. We didn’t create any clear-cut opportunites and it’s a side of the game we need to work on, which we will do.”

Sky Sports pundits Neil McCann and Kris Boyd were adamant that Aberdeen should have been awarded a penalty when Sam Cosgrove was pulled back by Conor McCarthy in the first half.

“Without a doubt and it was McCarthy who was caught out by the speed of the game and pace and power of Cosgrove,” McCann said.

“He’s get a big left hand full of McCarthy’s jersey but there is a pull and the final take down is in the box. I cannot fathom how John Robertson cannot see that. It’s not out of his view – I know he might have one eye on the ball but Kennedy is going nowhere. There is no tackle going to happen there. He knows the ball is going to come in so what is happening there?”

Boyd added: “It’s having an understanding of the game too. That’s a goalscorer, he’s not going to go down because he wants to score goals. He gets in the box and the next thing he’s down, you’re never going to dive in that situation. That is a stonewall penalty and Derek will be raging.”

St Mirren travel to Hibs next Saturday, while Aberdeen have the small task of a game against Rangers at Ibrox.