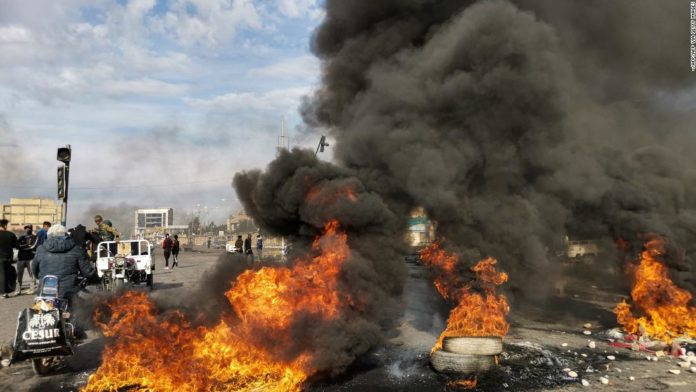 Nine protesters were killed in the capital Baghdad and three others in the southern city of Nasiriyah, about 350 km south of Baghdad, according to the statement.
More than 600 people have been killed in anti-government demonstrations that started in October, according to the IHCHR and Amnesty International.
Dozens of Iraqi security forces used live ammunition and tear gas as they worked to disperse hundreds of anti-government protesters in al-Khalani Square, Baghdad, on Saturday, according to activists in the area.
Activists said the aggressive move came after Shia cleric Muqtada al-Sadr announced in a statement Friday night that he would no longer support anti-government protesters.
Hours later, hundreds of his followers left Tahrir Square in response to his statement.
Activists said security forces clashed with hundreds of protesters in the southern city of Basra after they tore down dozens of their sit-in tents. Hundreds of protesters in both Basra and Baghdad were dispersed on Saturday, and six protesters were wounded in Basra, according to activists there.
Iraqi security forces in Baghdad and Basra did not respond to CNN’s phone calls and requests regarding incidents in Baghdad and Basra.
“Unaccountability and indecisiveness are unworthy of Iraqi hopes, courageously expressed for four months now,” UN Special Representative for Iraq, Jeanine Hennis-Plasschaert, tweeted Saturday.
“While death and injury tolls continue to rise, steps taken so far will remain hollow if not completed. The people must be served and protected, not violently oppressed,” she said.