Home Culture Conductor Gustavo Dudamel: It’s necessary “to have art as part of your... 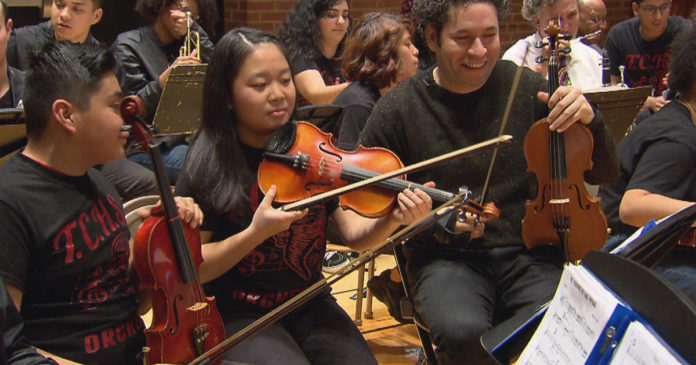 Conductor Gustavo Dudamel is a rock star of the classical music world. So, how did he end up on a folding chair playing in a public school theater?

Violin players Francisco Guerra and Deborah Htu, who are high schoolers in Trenton, New Jersey, said it was the surprise of their lives. “This is like a really big honor,” Guerra told CBS News’ John Dickerson.

But for Dudamel, it is a part of his life story.

Dickerson asked him, “When you look at the students playing, what do you see?”

“Well, I see myself, you know?” Dudamel replied. “Because it’s exactly the same environment where I grew up.”

A transplant from Venezuela who answers to “Maestro,” Dudamel now leads the Los Angeles Philharmonic, where he was named music director at just 28. He’s performed at the Super Bowl, and for Pope Benedict XVI.

Now 39, he recently wrapped up a string of performances conducting Princeton University students. It’s a long way from his first conducting gig. “My favorite game [as a child] was to arrange my toys like an orchestra and conduct them,” he said. “That for me was the most fun part of the day.

“I put on a recording, it was a LP. And I was rehearsing. Seriously. ‘This is not together. This is loud. Please play less. So, let’s go back.’ That made me be what I am, you know? And I do the same, of course, not with toys, but with great artists in front.”

Most of all, he credits a Venezuelan program that stresses music as a way to enhance lives, and targets students when they’re young. The late Bob Simon featured Dudamel and the program on “60 Minutes” in 2008, calling El Sistema “less a music program than a profound social movement that takes kids off the streets, takes them away from crime and drugs and despair.”

Dickerson asked, “You once said, ‘The music saved me.'”

“Are you trying to help save others?”

“Completely. The power of transformation that music have, you know, in the life of children, it’s unique, you know, especially for disadvantaged children. What is the worst thing? To be poor, to be no one. You are excluded in the society. When you give an instrument, that is something sublime.”

Now, an ambassador of the sublime, Dudamel travels to cities like Trenton, N.J., where the median household income is about $31,000. The Trenton Music Makers is a program inspired by El Sistema. Speaking to students there, Dudamel said, “I play in an orchestra like you. I was making a lot of mistakes, but I was having a lot of fun!”

Dickerson asked Dudamel, “The American government has cut funding for the arts programs. And it kind of gets pushed to the back. What would you say?”

“It’s all the time,” he said. “When it comes, an economic crisis, the first thing that get cuts is art. Because art have been seen as entertainment, as something elitist. And it’s not like that. Art have to be part of the fundamental education of a child. It’s a transformation of the society.”

It’s a transformation, the maestro said, happens one student at a time – which brings us back to that high school orchestra practice, and violin players Deborah Htu and Francisco Guerra.

Dickerson asked, “What was it like, when he sat down next to you to play?”

“Did he say anything to you?”

Guerra added, “He was very into it.”

Infectious excitement is a Gustavo Dudamel trademark, available to everyone – and necessary, no matter your profession. Htu told Dickerson didn’t want to grow up to become a musician, but to be a nurse, while Guerra is pursuing engineering.

“Even if the students here don’t go on to be professional musicians, it still has value?” asked Dickerson.

“Absolutely,” Dudamel replied. “It’s not to be musicians. It’s to touch art, you know, and to have art as part of your life.”

And this is what it sounds like to have art touch your life: According to Deborah Htu, “Sometimes, I’ll be having a hard time in school. And then I start playing music, it make me forget everything that’s happening.”

Francisco Guerra said, “Without music, like, imagine: the world would be boring.”