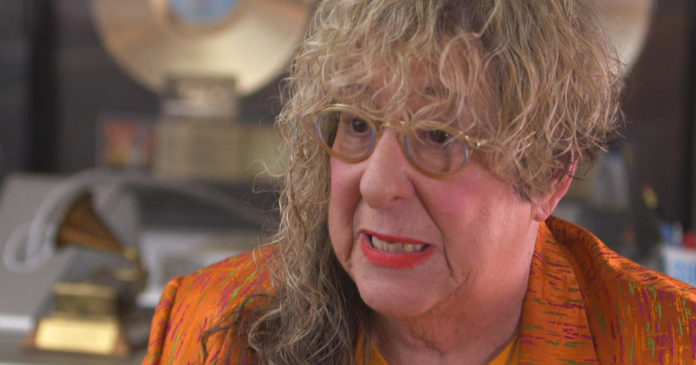 Some of the most popular songs of our time bear the label “Lyrics By Alle Willis,” the Grammy-winner who died this past Christmas Eve at the age of 72. Her unique talents, and eccentric habits, were on full display a while back when Nancy Giles paid her a visit:

Not too far from Hollywood, there’s a technicolor dream of a house, a splashy, quirky canvas, right down to the woman who owned it, Allee Willis.

Correspondent Nancy Giles asked her, “If you had to describe yourself, like, who is Allee Willis?”

“Well, I can tell you that my life’s quest is to figure that out!” she replied.

It was an astonishing life. For starters, Willis amassed one of the largest private collections of pop culture memorabilia in the country. How about Beatles pantyhose?  And Sammy Davis Jr’s very last stash of marijuana?

The items are unique. But it’s her story that stands out, and it began when Willis was a kid in Michigan. “I grew up in Detroit when Motown was coming up,” she told Giles. “So, you had a city that had its own soundtrack, records that I went crazy for.”

She loved the music so much that after school she’d hang out by Hitsville. “I would get dropped off and I would sit on the front lawn, every single Saturday,” she said.

Willis left Detroit, but the music stayed with her. She wrote album liner notes for a record company, and then tried to write her own melodies. “In 1972, there was a ballad out called ‘Alone Again (Naturally),’ by Gilbert O’Sullivan. Killed me. And I was on a bus, and I just started scribbling my own lyrics to it.”

She became a songwriter, and in a few years got a life-changing call from Maurice White, of Earth, Wind and Fire, who asked for help on a tune he was working on.

Maybe you’ve heard of it:

“First thing he told me was, ‘It has to be called ‘September,'” Willis recalled. “And he had, ‘Do you remember 21st day of September.’ So, first thing I said was, ‘Day’s gotta go. It’s gotta be night. It’s more romantic.’ I hung up the phone and it was like, ‘This has gotta be a joke. There’s no way this is actually happening. And I’m literally looking at the food stamps and going, ‘Okay, do I need bread?'”

Released in 1979, “September” is one of the most popular disco and dance songs of all time. And last year, it was added to the Library of Congress’ National Recording Registry.

“September” was big; so was Willis’ next collaboration with Earth, Wind & Fire, “Boogie Wonderland.”

“We wanted to use the word ‘boogie,’ because everyone and their mother was using it,” Willis said. “And then I would always write the whole alphabet across there; I’d go, ‘What rhymes with boogie? Doogie, oogie, foogie, joogie, duh duh duh duh duh.”

More hits followed. Willis co-wrote a couple of songs from the “Beverly Hills Cop” soundtrack: “Stir It Up” by Patti Labelle, and the Pointer Sisters’ “Neutron Dance,” a Grammy-winner:

She was also nominated for a Tony Award for co-writing the music and lyrics to the Broadway show “The Color Purple.”

Watch a performance of excerpts of “The Color Purple” from the 2016 Tony Awards ceremony:

But it’s on television where she may have left her biggest mark.

“So they said, ‘There is this TV show coming on in three weeks. It is not a hit. Just write this,'” she said. “So, I bitched through the writing of that song. I went, ‘This is the whitest thing I have ever written! If anyone ever hears this song, it’s gonna ruin my reputation!'”

Willis would give in, writing the lyrics to “I’ll Be There For You.”

The Rembrandts perform “I’ll Be There For You,” the theme song of “Friends”:

And speaking of friends, Willis had many over the years, and loved showing them around her home. “They can come in here not understanding anything and look at one object and went, ‘Oh my God, I played that game when I was a kid,’ and the armor just rolls off.”

Allee Willis embraced life by being herself. And she always had advice for those who walked to their own rhythm.

“You can be in the worst circumstances and still kind of dig the joy out of there,” Willis said. “And if you hang with it long enough, it is going to pay off.”

Cloris Leachman knows just how to serve it up

‘I’m exactly where I need to be’: Pamela Anderson marries her bodyguard