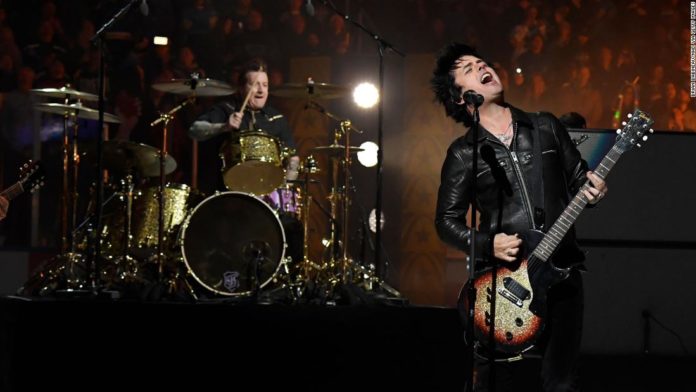 Green Day played a set outside the Enterprise Center on Saturday before the game, and then took the ice to play during the second intermission of the All-Star Game.
The first curse word came during their 1994 hit “Basket Case,” when lead singer Billie Joe Armstrong yelled, “Get your f**king hands up in the air!”
Then during “American Idiot,” Armstrong interjected with the line, “Let’s go f**king crazy!” That song also includes a lyric with the other f-word, the anti-gay slur.
The lines were muted out by NBC’s censors, but the curses did make it through on the secondary audio feed, according to former Deadspin video director Timothy Burke.
After the show, Green Day tweeted a cheeky response about all the attention.
“Anyone know why we’re trending? We’ve been busy having a blast w the NHL in St. Louis all night,” the band wrote.
And Green Day drummer Tré Cool tweeted a few more f-bombs for good measure.
Green Day and the NHL are just months into a two-year marketing and promotional partnership that includes performances, appearances and other collaborations, the two announced in September.

Treaty on the Prohibition of Nuclear Weapons

MSC Magnifica to return to Southampton for summer 2022

Sri Lanka to reopen borders to tourists this week