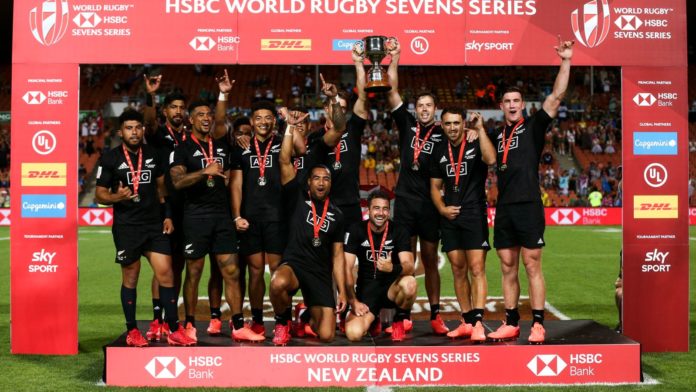 It was double delight for New Zealand as the men’s and women’s teams claimed home glory in the Hamilton leg of the World Sevens series.

Scott Curry scored three tries and Regan Ware two as New Zealand overwhelmed France 27-5 in the final of the men’s competition to ensure they went unbeaten at the tournament.

The win was New Zealand’s first at home in four years, moving them 15 points clear of South Africa and France, who have now gone 15 years without a title, at the top of the overall standings.

The hosts were on top against France straight from the off, scoring early through Curry to lead 7-0.

France’s Tavite Varedamu was sin-binned in the first half but returned to immediately score an unconverted try. However, that was as good as it got for them.

New Zealand took command of the match from that point, scoring through Ware to lead 12-5 at half-time. Ware scored early in the second half, then Curry ran in two more tries to seal the win.

The tournament was one of major upsets, magnified by the unique format which meant there were no quarter-finals and only the top team in each pool progressed to the semi-finals.

Under that format, reigning World Series and Olympic champion Fiji and South Africa found themselves in a play-off for ninth and 10th, with the former winning 12-5.

England were one of the four semi-finalists after topping Pool B thanks to wins over South Africa, Kenya and Japan, but suffered a 10-5 defeat to France in the knock-out rounds. However, they suffered a 33-21 defeat to Australia in the bronze final.

Scotland finished 11th overall after beating Ireland 24-19 in their play-off match, while Wales ended the tournament 16th after going down 21-7 to Samoa.

In the women’s tournament, New Zealand overcame Canada 24-7 in the final to claim their third-straight World Series title.

The Black Ferns Sevens came from behind and survived having Ruby Tui sin-binned to take the win, with two tries from Michaela Blyde, plus one apiece from Niall Williams and Stacey Fluhler, who ended the tournament with 10 tries to her name.

England had to settle for a sixth-place finish after being eliminated in the pool stages, then suffering a 45-7 defeat to the USA in their play-off match. Meanwhile, a 26-19 win over Brazil saw Ireland claim 11th.

The World Seven series now moves on to Sydney next weekend.