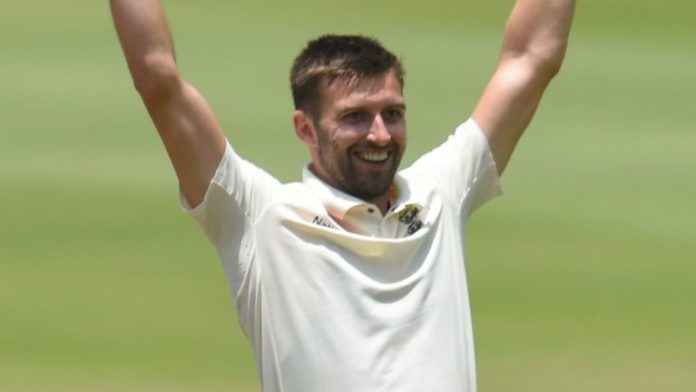 Watch day four of the fourth Test between South Africa and England in Johannesburg, live on Sky Sports Cricket from 7.30am

England bowler Mark Wood regrets being too “stubborn” to lengthen his run-up sooner after recording the second five-wicket haul of his Test career in Johannesburg.

Wood claimed the last two South Africa wickets to finish with figures of 5-46 and put England in total control as the home side were bowled out for 183 on the third morning of the fourth Test.

The 30-year-old paceman has struggled with injuries over the years and missed the whole of last summer’s Ashes series after having knee surgery.

But, after returning to the England side for the previous Test at Port Elizabeth, Wood is now back in the groove – having abandoned his shorter run-up after consultation with former West Indies quick and Sky Sports pundit Michael Holding.

“He said you’re putting too much strain on your body – lengthen your run-up and since I’ve done that it’s been a lot better,” Wood told Sky Sports. “I’ve got a bit more momentum and it’s taken more pressure off my body.

“With the short run I felt I had to force it. You’re not going to have rhythm every time when you’re running in, so I was still having to force it and put that extra strain on my body.

“It’s been nice to be able to take a load off and at times just feel my way in but still bowl quickly. I was so stubborn to change it because it had worked for me up to a point.

Although Wood performed well at Port Elizabeth, taking 3-32 in the Proteas’ second innings to wrap up a resounding win for England, his place in the team at the Wanderers was by no means a foregone conclusion.

However, Jofra Archer was unable to fully shake off the elbow problem that had sidelined him for the previous Test, ensuring that Wood and Chris Woakes lined up in an all-seam attack.

“Before the game, I didn’t think I was going to play,” Wood revealed. “Jofra, I think, was favourite and he’d looked good in the nets, but he pulled up on the morning of the game a bit sore, which brought me back in.

“I had an honest conversation with (coach) Chris Silverwood and (captain) Joe Root and said ‘I can play but I can’t guarantee fifth, sixth, seventh spell at 90mph – I’m still feeling my side a little bit.

“It was my first game in seven months, I pulled up a bit stiff from the last game with my side being the issue. But I’m delighted they made that decision and kept me in the team.”

Wood also contributed with the bat on the third day, hitting a brisk 18 late on as England scored 248 in their second innings – leaving the home side two full days to survive or an unlikely 466 to score for victory.

Holding, who took 249 wickets in 60 Tests and was one of the most feared international bowlers of his generation, explained the reasoning behind his advice for Wood to lengthen his approach to the crease.

“The first thing that shocked me was the amount of pressure he was putting on because of the short run, sprinting in to try and get the momentum that he needed,” said Holding.

“Like myself, he’s not a big man, so you need as much pressure off your body as you possibly can and you need to distribute that pressure throughout your entire body.

“You go to an airport, the plane takes its run on the runway and takes off. They invented a Harrier jet that went straight up – it burnt a lot of fuel. The one that took the long run didn’t burn as much fuel, as simple as that.

“Fast bowlers are on the operating table on a regular basis and that’s why I’ve told Mark ‘try to be as strong as you possibly can’. Everything is not going to be perfect, but rhythm and strength is what it’s all about.”

Watch day four of the fourth Test between South Africa and England in Johannesburg, live on Sky Sports Cricket from 7.30am.