Home Sport Is time up for Buttler in Test cricket? 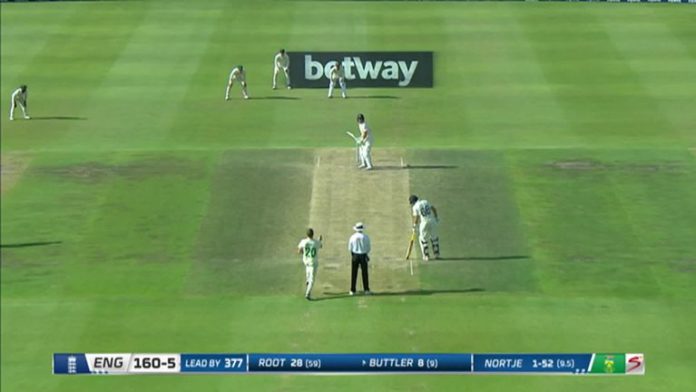 “It’s not happening for Jos Buttler.”

Michael Atherton summed it up in one short sentence as the England wicketkeeper-batsman departed having again failed to fire in Johannesburg.

The pressure has been building on Buttler throughout this series after a quiet Ashes series was followed by a fallow time out in New Zealand and he has been unable to respond.

After falling for eight in England’s second innings at the Wanderers, he ends the four-match series with an average of just 16.42 and a top-score of 29.

The question for England now is whether this is just a slump in form or, after 40 Test matches, is it time to accept that while Buttler is undoubtedly a world-class performer in white-ball cricket, he may never be able to replicate that form in the longer format?

It was less than two years ago that he was plucked out of the IPL by national selector Ed Smith and thrust back into a Test side against Pakistan at Lord’s.

He had been in imperious form in India and he carried that with him on his return to the five-day game, averaging 53.64 in his first 10 Tests back in the team, with a hundred and six fifties.

Since then though, the runs have gradually started to dry up. He managed two fifties in the West Indies but averaged less than 30. A quiet Ashes series ended on a positive note as he made 70 in the first innings at The Oval but he has not scored a half-century in five matches since.

There have been moves up and down the order, having returned as a specialist No 7, something of a luxury position, he slowly moved up to No 6 then No 5 and then back down again and has also been given the gloves this winter. In South Africa, whether he has been trying to dig in, searching for quick runs or something in between, the runs have just not been forthcoming.

The 29-year-old is the master of the run-chase in one-day cricket, his hundred against Australia at Old Trafford two summers ago was as good as any you are likely to see in terms not only of his strokeplay – it was actually his slowest century in ODIs – but the decision making and the ability to assess the situation, remaining ice cool throughout.

In Test cricket, where the scenario is often not as black and white as in 50-over or T20 cricket, he has admitted to struggling to work out quite how to pace his innings and what approach to take. If his role is the team has been discussed half as much inside the dressing room as it has by those outside, you could understand why there might be some confusion.

Buttler has just about every shot in the book – and plenty you won’t find in there too – but the demands of Test cricket mean that at times he is required to put a few of them away and grind it out. He can’t go too far into his shell though otherwise you lose the very thing he was first recalled to bring to the side. It is a delicate balance and one that he has battled with throughout his Test career.

With Ben Foakes and Jonny Bairstow waiting in the wings, you can see why England might be tempted to make the change and perhaps allow Buttler to continue to shine in white-ball cricket, especially with the T20 World Cup approaching.

It is not that straightforward though. Bairstow himself was dropped after the Ashes due to his own lack of runs and when illness allowed him a chance in the Boxing Day Test at Centurion, there was little to suggest he had addressed the technical issues that had caused him problems over the last couple of years.

Of course, Bairstow does have six Test hundreds behind him, including one batting at No 3 in Sri Lanka, England’s next destination in March. A definite tick for him but then he is not the only one of the contenders with fond memories of that tour.

Foakes scored a century on debut and was named player of the series. The 26-year-old can count himself rather unlucky not to have added to his five Test caps in the past year given he averages 41.50 – more than either Buttler or Bairstow, admittedly from a much small sample size – and it is widely accepted that he is the best gloveman of the three.

A less than stellar summer with the bat for Surrey didn’t help his chances of a recall but there is no doubt he will be part of the conversation when the selectors meet to discuss the squad for the two Tests in Sri Lanka.

Perhaps what could save Buttler is that it is a trip to the subcontinent up next. The dry, big-turning pitches would put his keeping to the test but he is one of England’s best players of spin and excelled with the bat on their last visit late in 2018.

He certainly won’t have to deal with the kind of pace and bounce off the surface that did for him in Johannesburg.

That range of shots was put to good use as he dominated the spinners with a succession of sweeps in the first Test before using his feet to great effect in the second, keeping the bowlers guessing and imposing his game on them in a way he has rarely been able to do since.

It remains to be seen whether England will persevere with Buttler but if they do, the pressure will really be on in Sri Lanka and Bairstow and Foakes are waiting to pounce.

He is one of England’s most naturally gifted players and a phenomenon in limited-overs cricket but Buttler is running out of time if he wants to avoid his name being added to the list of great white-ball players who couldn’t quite do it at Test level.

Watch day four of the fourth Test between South Africa and England in Johannesburg, live on Sky Sports Cricket from 7.30am.