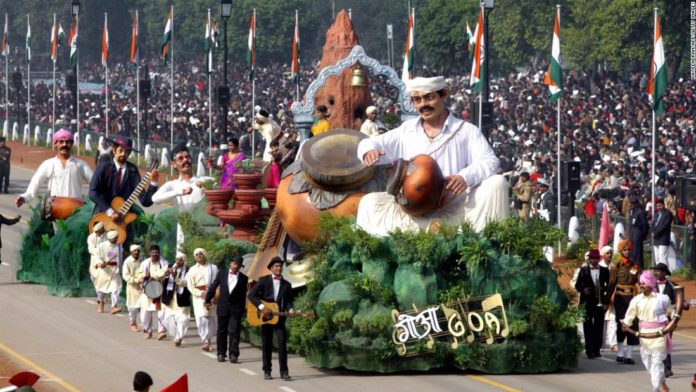 (CNN) — India is the world’s largest democracy, and it’s serious about its constitution. The country goes all out to celebrate its remarkable achievement in self-governing each Republic Day.

The biggest focus is on New Delhi’s impressive annual military and cultural parade, but this national holiday is celebrated far and wide.

Anyone who plans to travel to India during Republic Day can expect some potential transportation delays and various business closures, especially in Delhi. But you can be promised an amazing spectacle you won’t soon forget. First, a quick history:

What is Republic Day?

India’s high commissioner in London, Krishna Menon, signs the Oath of Allegiance to the Indian constitution on January 26, 1950.

India freed itself from centuries of colonial British rule in August of 1947. They began work on a new governing document for the sprawling nation, and it was adopted in November 1949.

But it wasn’t until January 26, 1950, that its new constitution went into effect.

And from that first January 26 onward, the country celebrates with Republic Day. In 2020, that date falls on a Sunday.

Indian soldiers march during the Republic Day parade in Delhi on January 26, 2009.

You’ll see displays of India’s military prowess with tanks, weaponry and precision marching by armed forces members in their finest uniforms. It’s not just a military display, though.

You can watch everything from men astride camels and military hardware displays to beautiful floats reflecting India’s many religions — Hinduism, Islam, Buddhism and more.

It’s a jubilant free-for-all with dancers in colorful, swirling costumes and acrobats on motorcycles.

This is also an international celebration, with dignitaries from around the world attending.

Back at the first Republic Day in 1950, chief guest was Indonesian President Sukarno. US President Barack Obama went in 2015. In 2019, South African President Cyril Ramaphosa had the honor.
In 2020, Brazilian President Jair Bolsonaro has accepted the invitation.

Where is Delhi’s parade held?

Indian army soldiers march during the Republic Day parade on the Rajpath in Delhi on January 26, 2012.

The route is more than 5 kilometers (3.1 miles) long, and it follows the Rajpath, one of the country’s most celebrated roadways.

It starts near the Presidential Palace, passes through the famed India Gate and winds up around the Red Fort.

The Rajpath is lined with lush green spaces, trees and canals. (Travel hint: If you aren’t in the city for the parade, the Rajpath is worth a visit any time of year).
The parade lasts about three hours and starts at 9:30 a.m. local time after a ceremonial hoisting of the Indian flag. The website Indianholidays.com has more details for interested travelers, including information on ticket prices.

What about the rest of the nation?

Delhi isn’t the only parade host. These soldiers march in Bangalore on January 26, 2011.

Republic Day is not just a Delhi affair. Flag ceremonies, parades and celebrations are held all over the country. Here’s a small sampling from some of India’s other cities:

— Bangalore (high-tech hub in south-central India): You can enjoy a parade and cultural fair at the Field Marshal Manekshaw Parade Ground.

— Chennai (capital of Tamil Nadu on the southeastern coast): India’s fourth-largest city has celebrations along Kamarajar Salai and at Marina Beach.

— Kolkata (eastern India and one-time capital under British rule): Its parade winds along Red Road near the Maidan.

— Mumbai (financial and entertainment powerhouse on the west coast): The city hosts celebrations at Shivaji Park or along Marine Drive.