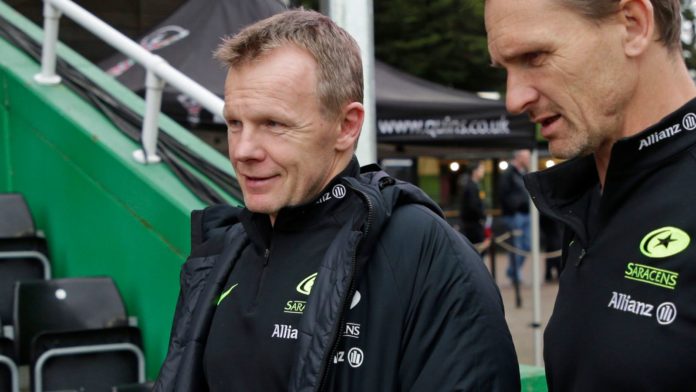 “It is quite difficult to focus on a game as big as this and against a Quins side who played as well as they did,” said McCall.

Mark McCall believes the uncertainty surrounding his players’ futures disrupted their concentration as Saracens were thrashed 41-14 at Harlequins.

With the future of each player up in the air as the club moves to reduce the wage bill, Saracens director of rugby McCall admits they struggled to focus at the Stoop, where they were blown apart by Quins in their first league match since relegation.

“It is quite difficult to focus on a game as big as this and against a Quins side who played as well as they did,” McCall said. “After 19 weeks, this was a bridge too far for us.

“I don’t think what happened today was reflective of how this team has done in the last few weeks. That team beat Leicester at Welford Road and Gloucester at Kingsholm.

“I think this game is the worst you will see of us. We hope to be far more competitive than that for the rest of the season. It’s just that things are still fresh and raw.

“A lot of directors of rugby have said it has been a long 19 weeks. It has been longer for us, I can promise you that.”

Cadan Murley crossed for two tries while Danny Care, Gabriel Ibitoye, Paul Lasike and Martin Landajo all went in for one each for the hosts.

Alex Lozowski and debutant Dom Morris both crossed for the visitors, but those scores proved scant consolation and McCall admitted the news of Saracens’ relegation came as a shock to all.

“This has been the most difficult week because when the original decision was made, there was a strong feeling in the group that we wouldn’t get relegated,” McCall said.

“But the news last week that we were and all the repercussions that have come this week have made it the toughest and brought a lot of anxiety about people’s personal situations and what they will do next.”