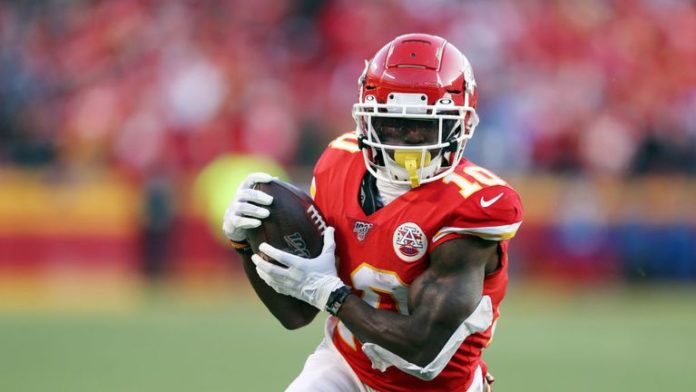 Watch some of the incredible, athletic plays made by speedy Kansas City Chiefs receiver Tyreek Hill this season.

Patrick Mahomes is the star of the show and will be in the spotlight at Super Bowl LIV in Miami, but he wouldn’t have as much success on deep passes without his top wideout, fourth-year receiver Hill.

Despite missing four games with a shoulder injury suffered in the season opener, Hill made his return in Week Six against Houston and wasted no time in proving his worth with a 46-yard leaping grab over double coverage for a spectacular touchdown.

Chiefs: Road to the Super Bowl

The Kansas City Chiefs have reached their first Super Bowl in 50 years – but how did they make it there?

With Mahomes also injured in the middle of the season, Hill stepped up, hauling in 57 and 40-yard bombs from Matt Moore against the Broncos and Vikings in two crucial wins.

In Week 14, Hill even did it in the snow with two TDs at home against Denver, including a 41-yarder, then when the Chiefs needed a spark against the Titans in the AFC Championship game, he scored both of Kansas City’s opening touchdowns as they came back from 10-0 and 17-7 down to eventually win 35-24.

Click on the video at the top of the page to watch Hill’s best plays from this season!