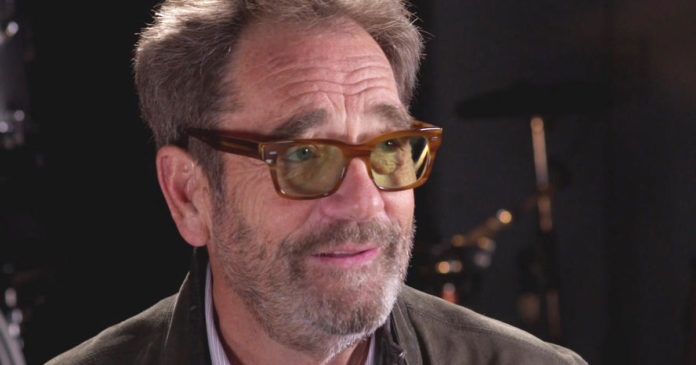 Previewing music from their new album coming out next month, Huey Lewis and band members Johnny Colla and Bill Gibson are in the mood to celebrate.

“It has a Huey Lewis and the News sound to it for sure, right?” asked correspondent John Blackstone.

“Well, we only worked on this song for about 20 years!” laughed Lewis.

But there is a cloud over this celebration. Their new album. “Weather,” has just seven songs on it.

Blackstone said, “You would have wanted to add some songs to this album, but problems struck.”

To listen to Huey Lewis & The News perform “While We’re Young,” from their upcoming album “Weather,” click on the player below:

Lewis, who is 69, has spent a lot of time recently being examined by doctors. He can’t perform or record. He can’t sing, not because of his voice, but because of his ears. “I lost my hearing almost two years ago now,” he said. “I had lost my right ear. I was diagnosed with a thing called Meniere’s disease.”

Lewis has been in bands for most of his life, and hearing loss is not unusual among rock musicians. But his diagnosis, Meniere’s disease, is not something remedied with hearing aids alone. The hearing loss means not just that Lewis has difficulty hearing, but that sounds are horribly distorted.

“Right now I’m having a good day; yesterday was a really bad day,” Lewis said. “And now I’m having a good day today. But could I play a show where there’d be a loud PA? Probably not, ’cause a bass part which would normally sound like [imitates bass chords] to me sounds like [makes very distorted noises]. When it occurs in music, it’s like cacophony for me. I can’t hear anything.”

Lewis had been successfully performing for decades with minor symptoms of Meniere’s, but those symptoms suddenly became debilitating, just before he went onstage at a gig in Dallas, on January 27, 2018: “And I went onstage, and it was horrible. It was just unbelievable. Couldn’t hear anything. Sang out of tune. Had the worst night of my life.”

Gibson added, “He was a whole step flat. It was clear that he could not get the pitch of the song. So, I remember looking at our bass player, John Pierce. We immediately looked at each other and went, ‘Uh oh.'”

The group, which had been on the road together for about 40 years, canceled the tour.

In the early 1980s, Huey Lewis and the News was a band struggling for respect. On their first tours they were booed when you opened for the Doobie Brothers. “Every single night!” said Lewis.

“No, not every single night,” Gibson begged to differ.

“Oh, come on. Every night we were booed!” Lewis said.

Starting out, Lewis played harmonica in a band called Clover, one of dozens of groups that worked the bars in Marin County, California, where Lewis grew up. “We moved here in 1955,” he said. “And it was very much a bohemian community, with the mountains and so on.”

Marin County, just north of San Francisco, also attracted plenty of rock musicians, a haven away from the city.

And there is one particular place in Marin that Lewis put on the map: The 2 AM Club, in Mill Valley, known locally as “The Deuce.”  And it became famous for the cover photo for Huey Lewis and the News’ first big hit album, “Sports,” shot at the club. A framed copy remains on the wall.

Blackstone asked, “How did you choose The Deuce to shoot this?”

“It looked like kind of what we sounded like,” Lewis said. “You know, we played a lotta clubs and were kind of a bar band-ish type thing.”

“Did you have hopes that you were gonna be much more than a bar band, at one time?”

“Oh yeah. Oh, we were convinced we would. I mean, you know, you always are. It’s part of the mindset.

“Making a living in the music business, as a musician, is a long shot. So, it has to be the only thing you wanna do.”

With “Sports,” Huey Lewis and the News made that long shot.

Huey Lewis and the News performs “If This Is It”:

The album became a bestseller, with four singles hitting the Top Ten, including “If This Is It”, “I Want a New Drug,” and “Heart And Soul.”

Huey Lewis and the News performs “Heart and Soul”:

In 1985 Lewis made his movie debut, a cameo in “Back to the Future” as a judge in a high school music competition. He wasn’t playing himself. The movie also featured Lewis’ #1 hit, “Power of Love.”  He followed that with a few other acting roles in TV shows and movies, including starring with Gwyneth Paltrow in “Duets” (2000).

But his heart remained in rock ‘n’ roll.

With loyal fans still eager to hear their music, Huey Lewis and the News played 70 to 80 shows a year. When they weren’t on the road, Lewis retreated to Montana, where he goes fly fishing and lives on a ranch – 500 acres he bought with his first big paychecks. Blackstone visited him there in 2013.

“I love it out here. It’s a chance to decompress, as they say,” Lewis said, when the phone wasn’t ringing.

Back then Lewis had no intention of slowing down.

Blackstone asked, “Do you ever think, ‘I’ve worked enough, it’s time to kick back’?”

“Yeah, I do, I think about that, but you know, the thing is I love what I do,” he replied.

Now, however, Meniere’s disease has made the decision for him and for his band.

Lewis said, “The hard part for me, I do miss playing a show now and then. And I miss the guys. I miss the camaraderie, you know?”

The guys still get together, testing Lewis’ voice, just in case, and joking about their age as they prepare for the release of what is almost certainly their last album.

So, where did the title “Weather” come from?

Lewis explained, “Do you get it? Huey Lewis and the News, ‘Sports,’ then ‘Weather.’ And it’s kind of appropriate, ’cause we’ve had some weather.”