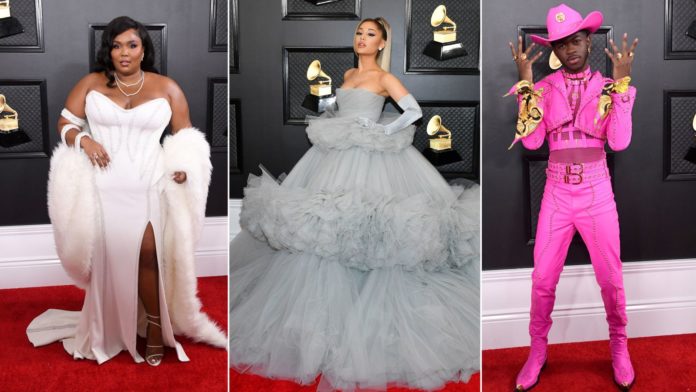 Ahead of the awards ceremony, the Grammys is all about the fashion.

Here are some of the best looks from this year’s red carpet.

She might not have been able to sit down properly, but Ariana Grande certainly made an entrance in flouncy grey ruffles Gwen Stefani wows in a short, beaded champagne-coloured dress Lewis Capaldi brings his own unique style to LA Lizzo is a red carpet angel in white Billie Eilish stood out in Gucci black and green Ozzy Osbourne walked the carpet with a cane with daughter Kelly, days after revealing his Parkinson’s diagnosis… … and wife Sharon was also there to support her husband British actress Jameela Jamil and her boyfriend, singer James Blake Lana Del Rey opted for a glamorous beaded silver gown British singer Dua Lipa went for a silky white Vivienne Westwood top and long skirt Gloria Gaynor is one of a number of celebs who went for pink… including rapper Lil Nas X in Versace… British star Yola… and US TV host Jennifer Lahmers Chrissy Teigen looked gorgeous in orange, while husband John Legend went for grey Film score composer Dana Sano stood out in a long black dress with a burst of floral colour Actress and model Megan Pormer made a political statement with her outfit Hip-hop star Johnny Venus went for cream and ruffles Jazz musician Esperanza Spalding made a statement in florals and lots of colour Musician Andrew Watt opted for silky pale blue Songwriter Ali Tamposi looked fiery in black and gold sequins Singer Pia Mia opted for silver sparkles Billy Porter wins the award for best hat, which could also double up as a fly curtain (albeit a very glam one) Finally, YouTuber Nikita Dragun went for a sheer nude dress with carefully placed beading