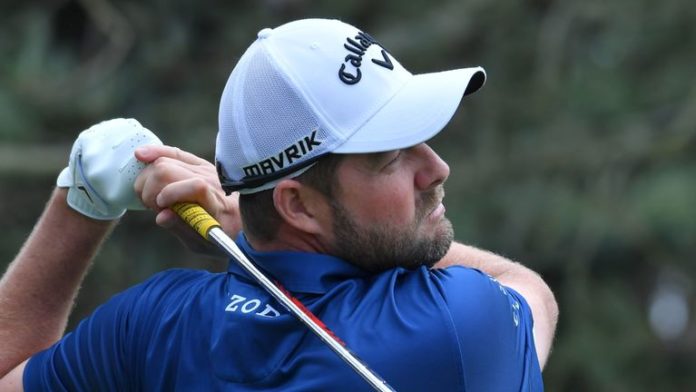 Marc Leishman produced an astonishing display of clutch putting as he fired a closing 65 to clinch a one-shot victory at the Farmers Insurance Open.

Leishman hit only three fairways in his final round, but his long-game mistakes were offset by some astute iron play and a red-hot putter as he became the second Australian to win big on Australia Day following Lucas Herbert’s maiden European Tour triumph in Dubai.

Overnight leader Jon Rahm and Rory McIlroy were left to rue horrendous starts to their rounds, while Tiger Woods was unable to haul himself into serious contention amid a muted atmosphere at Torrey Pines as news of the tragic death of NBA legend Kobe Bryant, a longtime friend of Woods, spread around the resort.

Leishman was four strokes behind Rahm after 54 holes, but the 36-year-old soon found himself in possession of the outright lead when he birdied five of the first eight holes, with Rahm and McIlroy plummeting rapidly down the leaderboard.

Rahm bogeyed the first and needed four shots just to find the putting surface at the par-three third, and another big pull at the fifth led to another dropped shot as he slipped to four over for the day before halting the slide with a welcome birdie at the sixth.

Tiger Woods reacts to the shocking news that longtime friend, Kobe Bryant, had died in a helicopter crash

McIlroy was also wayward early on and bogeyed three of the first four holes, but he was the first to launch a fightback when he followed a birdie at the fifth with a 20-foot putt for eagle at the sixth, and he pulled himself back to within two of the leader with further gains at eight and nine in a rollercoaster front-nine 34.

His challenge faltered again with a three-putt bogey at the 11th, while Leishman tightened his grip on the tournament with birdies at 11 and 13 before Rahm suddenly revived his hopes of a second title with an eagle at the long 13th, with McIlroy staying in the hunt with a birdie at the par-five.

Rahm then birdied 14 only to give the shot back at 15, with McIlroy also taking five which effectively left himself too much ground to make up, barring a Leishman collapse down the stretch.

Leishman scrambled excellent pars at 14 and 15, although he could not avoid a dropped shot at the penultimate hole when he bunkered his approach and splashed out to six feet, only for his putter to misfire for the first time in the day.

But the Aussie was a model of composure heading down the final hole and, after laying up with his second, he clipped a nerveless wedge to inside six feet and coaxed in the par putt, leaving Rahm needing an eagle to force a play-off after the Spaniard continued his resurgence with birdies at 16 and 17.

Incredibly, Rahm’s bold second to the last cleared the water and settled in almost exactly the same spot from where he holed for a thrilling eagle which sealed victory in this event three years ago, and his putt to tie Leishman appeared to be heading for the same result.

Unfortunately for Rahm, he had the line but was a foot short of pace as Leishman was confirmed as a winner on the PGA Tour for the fifth time, and his first title since the CIMB Classic in October, 2018.

Rahm tapped in for a birdie which capped a valiant, inward 31 and a round of 70, earning him outright second on 14 under ahead of McIlroy, who also birdied 16 and 18 to complete a 69 and a 72-hole score of 12 under par.

McIlroy shared third with two-time champion Brandt Snedeker, who returned a 68, while Woods was unable to get much going as he signed off with a steady 70 which left him in a tie for ninth place.

Woods did, however, produce one of the highlights of the day when his second to the second hopped into the cup on the third bounce, but he was robbed of an eagle-two when his ball suddenly reappeared after spinning back out of the hole.

He tapped in for birdie and picked up another at the sixth, but a bogey at the 10th effectively ended his hopes and, after closing with a four at the last, he was informed of the death of Bryant by his caddie, Joe LaCava, as they headed to the scorer’s office.