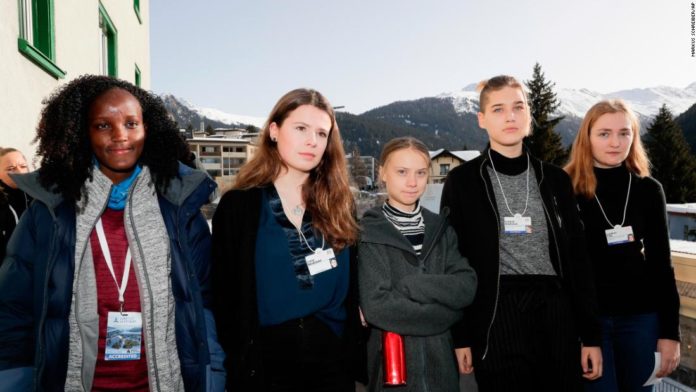 Climate activist Vanessa Nakate said she was invited to attend a youth climate science event. When news coverage of the event emerged, she noticed she had been cropped out of a photograph, where she appeared alongside alongside activists Greta Thunberg, Isabelle Axelsson, Luisa Neubauer and Loukina Tille.
“This is the first time in my life that I understood the definition of the word racism,” Nakate said in a video statement released online.
Nakate confronted AP about the incident on Twitter, writing “Why did you remove me from the photo? I was part of the group!”
In a video statement published online, Nakate said: “I see the photos and I clearly see how I was cropped out of the photos.
“My message was left out, and my photo was left out as well,” she said.
“You didn’t just erase a photo. You erased a continent. But I am stronger than ever,” Nakate said later on Twitter.
In a statement released on Friday, AP Executive Editor Sally Buzbee apologized for the incident.
“We regret publishing a photo this morning that cropped out Ugandan climate activist Vanessa Nakate, the only person of color in the photo. As a news organization, we care deeply about accurately representing the world that we cover,” Buzbee said.
“We train our journalists to be sensitive to issues of inclusion and omission. We have spoken internally with our journalists and we will learn from this error in judgment,” she added.
Thunberg said the incident was “completely unacceptable.”
The AP article Nakate referred to now contains an image showing her and other climate activists during a news conference.
Nakate later wrote: “Everyone saying that I should position myself in the middle is wrong! Does an African activist have to stand in the middle just because of fear of being cropped out?”
An earlier version of this story mis-attributed a statement by The Associated Press. This has been corrected.