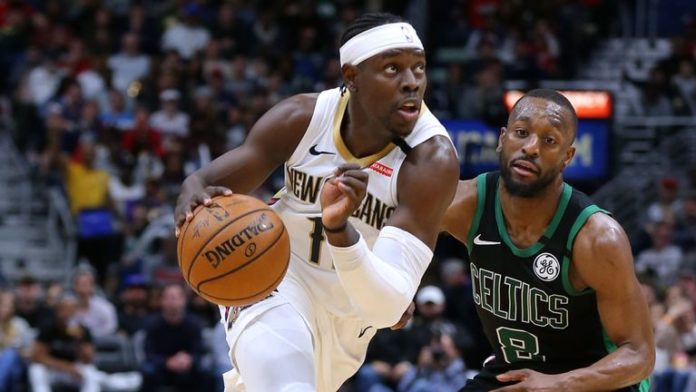 All-Star guard Kemba Walker led the Celtics with 35 points, Gordon Hayward scored 23, and Jaylen Brown, returning from a two-game absence due to an ankle injury, added 20.

Before the singing of the national anthem, the Pelicans held a 24-second moment of silence in honour of former Lakers star Kobe Bryant, who died along with one of his daughters, Gianna, and seven others in a helicopter crash near Los Angeles on Sunday morning.

When the game began, the teams followed the lead of the Spurs and Raptors earlier in the day by dribbling out the shot clock in Bryant’s honour on their first possessions.

Damian Lillard continued his scoring spree with 50 points, matched his season high of 13 assists and grabbed six rebounds to lead the Portland Trail Blazers past the visiting Indiana Pacers.

Lillard made 14 of 23 shots from the field – including 8 of 12 from three-point range – to become the first player in franchise history to record three straight efforts of 40 points or more. CJ McCollum scored 28 points and made six three-pointers for the Trail Blazers after missing the previous three games because of an ankle injury.

Jeremy Lamb scored 28 points and Domantas Sabonis had 27 points, 14 rebounds and a career-best 11 assists for the Pacers, who lost for just the second time in their past nine games. Indiana dropped their 11th straight game at Portland.

Trae Young responded in an emotional way to the death of Kobe Bryant by producing 45 points and 14 assists to help the Atlanta Hawks defeat the visiting Washington Wizards.

Young began the game wearing No. 8, Bryant’s original jersey number, before changing into his usual No. 11, and also wore Bryant’s No. 24 on the back of his shoes.

Get NBA news on your phone

Want the latest NBA news, features and highlights on your phone? Find out more

It was the eighth time this season Young has scored 40-plus points. He was 13 of 24 from the floor, 13 of 16 from the line and had six rebounds. Five other players scored in double figures: De’Andre Hunter with 25, Kevin Huerter with 18, John Collins with 16, Bruno Fernando with 14 and Cam Reddish with 13. Fernando had 12 rebounds.

Bradley Beal had 40 points and six assists for Washington, which had six other players score in double figures. Troy Brown Jr. finished with 19 points.

Michael Porter Jr. and Monte Morris scored 17 points each, Will Barton had 11 and Malik Beasley 10 for Denver.

The Rockets played without NBA leading scorer James Harden due to a left thigh contusion that head coach Mike D’Antoni said might keep him out of Monday’s game at Utah.

Kawhi Leonard scored 31 points and grabbed 14 rebounds, and Landry Shamet and Montrezl Harrell added 19 points each as the LA Clippers used a third-quarter charge to notch a road victory.

Lou Williams scored 15 points as the Clippers improved to 4-1 on their season-long six-game road trip. Leonard extended his career-long streak of 30-point games to eight.

Michael Carter-Williams scored 15 points as the Magic lost their third consecutive game and fell for the fifth time in their past six games.

Orlando lost twice to the Clippers during that stretch, falling 122-95 at Los Angeles on December 16.

Pascal Siakam scored 35 points, 30 of them in a dominating first half, and Fred VanVleet hit the decisive three-pointer in the final minute as the visiting Toronto Raptors earned a victory over the San Antonio Spurs.

It was Toronto’s seventh straight win, tying their season best. The last team to beat the Raptors were San Antonio, who defeated the Raptors 105-104 in Toronto on January 12.

Toronto led by 19 points in the first quarter, by a dozen at halftime but by just a point heading into the final period. The Spurs then scored 12 of the first 15 points of the period to take an eight-point advantage before the Raptors answered with a 14-0 run.

Ja Morant scored 23 points to lead three Memphis players scoring 20-plus as the host Grizzlies held off the Phoenix Suns.

Three other Grizzlies players scored in double figures, with Jonas Valanciunas adding 12 points, and Brandon Clarke and De’Anthony Melton each scoring 10 off the bench. Morant also had eight assists.

Kyle Anderson, starting in place of an unavailable Jae Crowder (knee soreness), had a team-high 12 rebounds.

Phoenix’s Devin Booker led all scorers with 36 points, his fourth game in the past five he has scored at least 35. Deandre Ayton scored 17 points, grabbed a game-high 15 rebounds and made three steals.

Following the sombre tribute, Memphis jumped ahead 30-18 after the first quarter. Morant, Jaren Jackson Jr. and Dillon Brooks carried much of the scoring load from the outset, and both Jackson and Brooks finished with 20 points.

Reggie Bullock fuelled a decisive third-quarter run by hitting back-to-back three-pointers – including the basket that gave the New York Knicks the lead for good – in their victory against the visiting Brooklyn Nets.

Spencer Dinwiddle scored 23 points for the Nets, who have lost six of seven and are 3-14 since Christmas. Taurean Prince had 14 points while Rodions Kurucs scored 12 points. Joe Harris and Garrett Temple added 11 points apiece.

The Nets were without Kyrie Irving – a close friend of Bryant’s – who sat out the game for personal reasons.