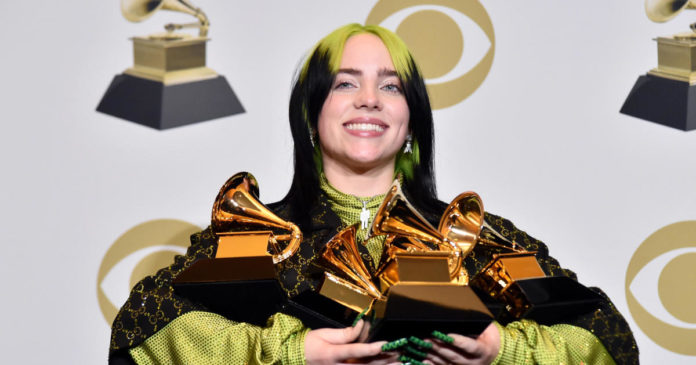 The 18-year-old singer-songwriter has been making waves in the music industry with her brother Finneas O’Connell with her debut album, “When We All Fall Asleep, Where Do We Go?” and the Grammy voters certainly took note.

The new kid on the block not only got the biggest awards, she was one of the night’s biggest winners, grabbing five of the six she was nominated for. She lost out only to fellow first-time nominee Lizzo for best pop solo performance.

While Eilish is 18 now, she was just 17 when the nominations were announced, making her the youngest artist in Grammys history to be nominated in all four major categories at the same time — and now her Grammys sweep makes her the youngest person to win the four top prizes.

Eilish beat Lizzo’s earworm “Truth Hurts” and  Lil Nas X’s song of the summer “Old Town Road” to snag the gold gramophone for song of the year with her hit “Bad Guy.”

“Oh my god. So many other songs deserve this. I’m sorry. Thank you so much. This is my first Grammy. I never thought this would ever happen in my whole life,” the teen said as she accepted the award with her brother.

“I didn’t think we would win this at all. I loved every song on this list,” her brother and newly-minted 5-time Grammy winner said. “We just make music in a bedroom together. We still do that and they let us do that. And this is to all of the kids making music in your bedrooms today. You’re going to get one of these.”

“Bad Guy” also won the Grammy for record of the year, where she was up against Lizzo, Ariana Grande, H.E.R., Lil Nas X, Bon Iver, Khalid, Post Malone and Swae Lee.

Eilish’s debut album came out on top to win her album of the year, making her the youngest winner of that award in Grammys history, and it won her the award for best pop/vocal album.

To top off her big night, the Los Angeles native was crowned best new artist, over Lil Nas X, Lizzo, ROSALÍA, Maggie Rogers, Tank and the Bangas, Black Pumas, and Yola. She dedicated her award to her fans, saying she thinks they “deserve everything. I feel like they have not been talked about enough tonight because they’re the only reason any of us are here at all.”