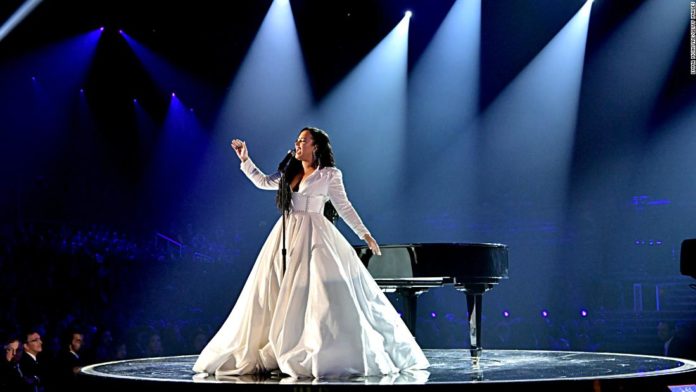 In “Anyone,” Lovato sings of her struggle with alcohol and loneliness in her time of need.
The 27-year-old singer was hospitalized in July 2018 after an overdose. In December 2018, Lovato opened up about her struggles, saying she was “sober” and “grateful to be alive.”
Lovato told Apple Music’s Beats 1 earlier this week that the song was written just days before her overdose.
Lovato stumbled in her first attempt to sing the song, stopping after one line.
After taking a moment to compose herself, she restarted and ultimately delivered a powerful vocal performance.
Some of the song’s lyrics read:
“I tried to talk to my piano
I tried to talk to my guitar
Talk to my imagination
Confided into alcohol”
“A hundred million stories
And a hundred million songs
I feel stupid when I sing
Nobody’s listening to me
Nobody’s listening
I talked to shooting stars
But they always get it wrong
I feel stupid when I pray
So, why am I praying anyway?
If nobody’s listening”
“Anyone” was made available for streaming following her performance.