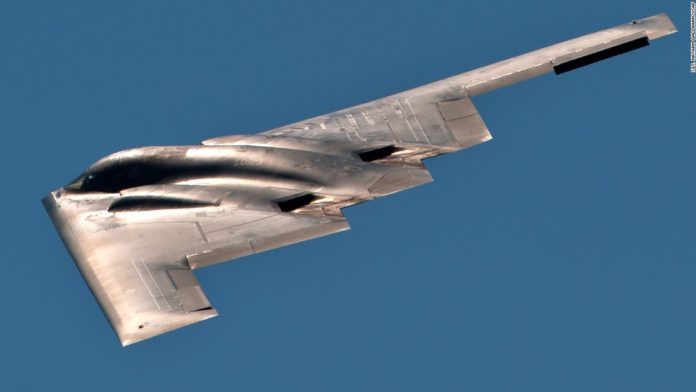 Written by Jacopo Prisco, CNN
With its “flying wing” design that makes it almost invisible to radar, the B-2 Spirit bomber is truly a standout among military planes — and also the world’s most expensive, at over $2 billion per aircraft.

A product of the Cold War, it was originally designed to penetrate Soviet air defenses and carry both conventional and nuclear weapons. But shortly after its first flight, over 30 years ago in 1989, the fall of the Berlin Wall ended the Cold War and no B-2 has ever flown inside Russian airspace.

Nevertheless, it has seen its fair share of combat. The first B-2 was delivered in 1993 to Whiteman Air Force Base in Missouri, where the fleet is based and still operates, and its first operational use was during the 1999 Kosovo War.

One of the most sophisticated flying machines in existence, the B-2 can reach a target anywhere in the world and return to base, refueling in mid-air. No B-2 has ever been lost in combat.

“It is really one of a kind, completely unlike any other plane ever designed,” Rebecca Grant, a B-2 and aerospace expert who has flown in the classified plane, said in a phone interview. “Seen from the cockpit, the flying wing is so distinctive. It is very special — more of a sentient being than just a regular airplane. Maybe that’s why all of the B-2s are rumored to have unique personalities and they’re often referred to as she.”

The Northrop Grumman B-2 Spirit first flew in 1989 and 21 B-2s are still in service with the US Air Force. It is designed to be completely invisible to radar. Credit: USAF/Getty Images North America/Getty Images

The idea of designing a plane as a flying wing — without a definite fuselage, a tail and other protuberances — is an early one in aviation, surfacing before World War I in Germany and the Soviet Union. Towards the end of World War II, Nazi Germany built and tested the Horten Ho 229, a futuristic flying wing aircraft with rudimentary stealth features, to which the B-2 bears a striking resemblance. In the United States, this type of design was pioneered by aircraft designer and industrialist Jack Northrop, whose first flying wing prototypes — in small scale and powered by propeller engines — took to the skies in 1940.

Northrop’s work culminated in the YB-49, his first jet powered flying wing design, in 1947. Far ahead of its time, the project was held back by technical difficulties and quickly scrapped. However, the work done on the YB-49 was used to kickstart the B-2 program — the company that makes it was founded by Northrop himself — and although the planes are decades apart, they have many similarities, including the exact same wingspan.

The B-2 is one of three strategic bombers currently in service in the US Air Force, along with the agile Rockwell B-1 Lancer, which first flew in 1974, and the gargantuan Boeing B-52 Stratofortress, a legendary aircraft from the 1950s that has been constantly updated ever since.

The B-52 first introduced the idea of flying a bomber at very high altitudes, to make it harder for anti-aircraft missiles to reach it, while the B-1 tried the opposite: flying so low and fast that radar would have trouble picking it up. Neither strategy was perfect nor immune to enemy fire, and Cold War tensions were calling for the ultimate nuclear deterrent: a bomber capable of carrying atomic weapons while being virtually undetectable by enemy air defenses.

A B-1 Lancer, a B-2 Spirit and a B-52 Stratofortress perform a flyover at Barksdale Air Force Base. Credit: David Wa / Alamy Stock Photo

This dream became a reality in the 1970s with the introduction of stealth, a set of technologies that make an aircraft difficult or impossible to spot for radar. “It was a Cold War product, but also a product of a big technological breakthrough in designing an airplane to be stealthy,” said Grant.

“The mission of the B-2 was to elude Russian air defenses, both their surface-to-air missiles and their top-line fighter aircraft. And that’s still its mission today — to elude the best enemy air defenses wherever we find them.”

A B-2 is followed by two F-117s, an earlier stealth plane with a strikingly different design approach, dominated by flat panels and jagged edges instead of smooth curves. Credit: USAF/Hulton Archive/Getty Images

To do so, the plane includes a range of features, many of them classified, that mask it from view. “The first is the shape, which alters the radar reflection,” said Grant.

Radar — an acronym for “radio detection and ranging” — was invented during World War II and works by sending an energy pulse through the air and waiting for it to bounce off objects such as airplanes, and then come back. The intensity and angle of this reflection gives the size and location of the target.

Unlike other aircraft, the B-2’s flying wing design doesn’t have any large vertical shapes, such as a tail, for radar waves to bounce off. In fact, its smooth surface is designed to scatter radar waves completely, so that almost none return to the source, making the plane appear as small as a bird. Ironically, the principles used for this were first exposed by a Russian physicist, Pyotr Ufimtsev, in a 1962 book which the Soviet Union deemed of no national security value, thus clearing it for publication.

“There are also radar-absorbing coatings and materials, and you can’t see its engines because they are tucked away in the aft section, to avoid producing any heat signature,” Grant said. A heat signature is a dead giveaway that a plane is in the sky, and the B-2’s designers went to lengths to obfuscate it, even using the same kind of heat-absorbing tiles that protected the Space Shuttle during re-entry, placed near the engine exhaust.

An on-board system alerts the crew if the plane is creating contrails — the vapor trails that form when ice crystals coalesce around aircraft exhaust gases — allowing them to change altitude. Finally, the B-2 is very quiet, and can only be heard once it’s passed overhead.

These features, known collectively as low observable technology, are not always in operation, but are activated when the plane needs to become invisible. Among other things, pilots must press a button in the cockpit marked “PEN,” to penetrate enemy defenses. “Just like any combat aircraft, when you’re near the threat you do a whole bunch of things to get ready to penetrate. They won’t tell you the whole procedure, but it’s true — they do stealth up when they come near the target area,” said Grant.

Two days in the air

B-2 missions have lasted as long as 44 continuous hours — such as one flown in 2001 from Missouri to Afghanistan during operation Enduring Freedom — which is why there is a flat space behind the cockpit where one of the two pilots can rest, along with facilities to store and heat food, as well as a toilet.

While no B-2 has ever been lost in combat — the plane doesn’t even have defensive weapons — one was destroyed in an accident in 2008, when it crashed shortly after takeoff from Andersen Air Force Base on Guam (the pilots ejected safely). Another B-2 was severely damaged in a fire in 2010 and sustained extensive repairs before coming back into service.

All B-2s are named after a US state (“Spirit of Missouri”) and are among the most high-maintenance planes in existence, and tens of hours of servicing are needed for each hour of flight. The delicate skin of the plane, which provides additional stealth, must be stored at cool temperature, requiring air-conditioned hangars that contribute to the high operating costs.

The 21 B-2s that were built also had to bear all the costs associated with the program’s research and development, which would have been more evenly spread over a larger number of aircraft. “That made their sticker price upwards of $2 billion each — it would have been much more reasonable had they built 132 as originally planned,” said Grant.

Because of the small fleet and its classified technologies, the B-2 is a coveted plane to fly, and only a few hundred pilots have ever boarded one. “They have a very rigorous selection procedure, but one thing they place great value on is personality and compatibility — you have to be the right kind of person to fly those 40-hour missions with a two-person crew,” explained Grant.

“It flies like a regular plane, but it has some unique features. When you fly, you’re right up on the front edge, so the perspective is very different and it takes some real skill to refuel and to land.”

Through the years, the plane has received upgrades to its flight systems, communications and weapons. It is still firmly part of the US’s nuclear triad deterrent, along with intercontinental ballistic missiles based on land and aboard submarines.

Its days, however, might be numbered: the B-2’s successor is already in development. Called the B-21 Raider, it’s shrouded in secrecy and expected to debut sometime after 2025. The new plane will take on the same role as the current one, but it will be designed making full use of the technological advancements that have occurred since the B-2 was first conceived, over 40 years ago.