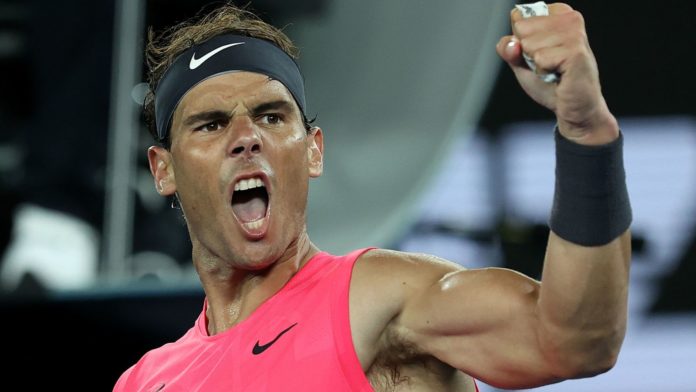 World No 1 Rafael Nadal proved too good for a weary and emotional Nick Kyrgios to reach the Australian Open quarter-finals on Monday.

The mercurial Australian Kyrgios, who expended every ounce of energy to come through a four-and-a-half-hour battle with Karen Khachanov amid raucous scenes on Saturday evening, was unable to replicate the feat while Nadal looked every inch the superior player in a thrilling 6-3 3-6 7-6 (8-6) 7-6 (7-4) victory on Rod Laver Arena.

The tournament marked the death of Kobe Bryant by showing a montage of the basketball star in action on the big screen ahead of the most highly-anticipated match of the tournament.

Kyrgios, a huge basketball fan, struggled to hold back the tears as he warmed up for the encounter wearing a Los Angeles Lakers vest with Bryant’s number eight on it.

It’s one of those days you want to forget but of course Kobe Bryant will be in our hearts and in our minds for the rest of our lives.

Speaking about Bryant, Nadal said: “What can I say? I wake up this morning with this terrible news. Super sad. He has been one of the greatest sportsmen in history. He deserves a round of big applause.

“I met him. I have a very close friend who was playing with him for a long time, Pau Gasol, and he always told me about his spirit, he always wanted more.

“He has been a true inspiration for the world of sport. It’s one of those days you want to forget but of course Kobe Bryant will be in our hearts and in our minds for the rest of our lives.”

Nadal came out the blocks in lightning-quick speed by breaking in the fourth game and that was enough to hand him the opening set.

The Spaniard looked to be in cruise control, but the 23rd seed, backed by the fervent home support, responded with a flurry of winners to open up a 4-1 lead in the next and he soon served it out to level up an intriguing encounter.

Kyrgios was forced to dig deep to save a break-point chance in the eighth game of an absorbing third set. He began to flatten his forehand, giving Nadal less time to respond as the Australian tried everything in his box of tricks to prize open an indefatigable top seed. Mixing explosive ground strokes with slow balls, forehand slices, drop shots, an underarm serve and everything in between.

It inevitably had to be settled by a tie-break and at 3-1 down Kyrgios received a code violation for smashing his racket in frustration. Despite managing to regain his composure to wipe out Nadal’s mini advantage for 5-5 he quickly lost it again to hand the 2009 champion the set.

Nadal, who is also a four-time runner-up in Melbourne, seized his opportunity against a deflated Kyrgios with an early break in the next as he began to prize open his opponent.

He won 14 straight points on serve to close in on victory. However, Kyrgios, driven by his efforts in raising money for victims of the wild fires, has been keen to show Australia that he cares on court as well as off it. He rallied in stunning fashion to break back for 5-5 when Nadal served for the match before saving two break points on serve for the lead.

They headed into another tie-break which was full of more thrills and spills, but Kyrgios was punished for being over extravagant once again with a fluffed drop shot at 3-4 cost him dearly. And as with their clash at Wimbledon last summer, it was Nadal who ran out the worthy winner.

He will face Austrian fifth seed Dominic Thiem for a place in the semi-finals. Nadal leads their overall meetings 9-4.

“It was a very tough match. It seemed in the beginning I had a little bit of control but against Nick you never have
control,” said Nadal.

The Spaniard described the game he played to drop serve at 5-4 in the fourth as “crazy”, adding: “That’s part of the sport. Accept that and then I tried to recover mentally and find the level of my tennis.”

Nadal also paid tribute to Kyrgios’ effort encouraging him to “keep working” as well adding how much he enjoyed seeing his newfound attitude.

“When he’s playing like today with this positive attitude, he gives a lot of positive things to our sport so I encourage him to keep working like this because he is one of highest talents that we have on our tour and I like the Nick Kyrgios during the whole of this tournament.”